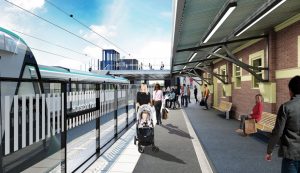 Sydney Metro has been awarded a contract to upgrade the stations on the T3 Bankstown Line between Sydenham and Bankstown, operated by Sydney Trains, that will be part of the Sydney Metro City & Southwest project. The project covers upgrade works and the conversion to metro standards of all 11 stations.

The contract was signed with a consortium comprising Haslin Constructions and Stephen Edwards Constructions. The joint venture will modernise and upgrade the stations to meet metro transport standards.

The constructions are expected to start in the first half of 2021 at Marrickville, Canterbury and Lakemba stations.

The works include upgrading and re-levelling existing platforms to provide level access to the new fully-air-conditioned metro trains, the installation of two new lifts at Canterbury station, connecting the concourse to Platforms 1 and 2, the construction of new family-accessible toilet at Canterbury station, upgrades to stations like painting, improved lighting, tiling and paving. Under the contract, the joint venture will also upgrade security fencing to the rail corridor, including installing anti-throw screens on existing overbridges adjacent to each station and will improve the interchanges including bike parking, taxi spaces, kiss and ride and accessible parking.

The stations will also be prepared for the installation of platform screen doors. These glass safety barriers keep people and objects like prams away from the tracks and are being used for the first time in Australia on Sydney Metro.

The metro transport services on the upgraded Bankstown Line will start in 2024, when the passengers will have a train every four minutes in each direction in the peak, with an average of 15 trains per hour per direction. Currently, some stations such as Wiley Park and Canterbury only have four trains an hour.

Sydney Metro says that further contracts will be awarded in 2021.

In 2018, Sydney Metro received the planning approval to upgrade the Sydenham – Bankstown section on T3 Bankstown Line. in 2024, Sydney Metro City & Southwest will complement the city’s metro system to reach a network of 66 km served by 31 metro stations.