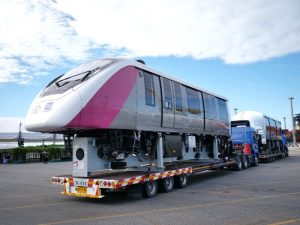 Bombardier Transportation has delivered the first of 72 Innovia monorail 300 trains to Thailand to operate Bangkok two lines. The Prime Minister of Thailand Prayuth Chan-o-Cha and the representatives of Mass Rapid Transit Authority the attended the ceremony.

Under the contract, Bombardier will deliver Bangkok the monorail system comprising the train fleet, the wayside systems and the automated CityFloO 650 rail control and system integration.

The monorails will enter passenger services on the new Pink and Yellow Lines, which will provide 64-km of new rail-based urban transport links across Bangkok.

The Pink Line will have 34.2 km and 30 stations linking Khae Rai and MinBuri, which will provide transport connection between Bangkok and Nonthaburi Province.m

The Yellow Line will have 30.4 km served by 23 stations, running from Lat Phrao to Samrong.

The Innovia monorail 300 vehicles will be able to run at speeds of up to 80 km/h and with a maximum system capacity of over 28,000 passengers per-hour, per-direction.

The system is being delivered from Bombardier’s Bangkok Engineering Centre with vehicles manufactured by the CRRC Puzhen Bombardier Transportation Systems Limited joint venture, based on Bombardier’s original design from Canada.

In addition to this train delivery, Bombardier is also supplying Bangkok Innovia APM 300 automated people mover system for the Gold Line. The Canadian manufacturer is also the signalling supplier for the Bangkok Skytrain and MRT Purple Line and a section of the State Railway of Thailand’s Northern Line upgrade.

In May 2020, the transport authority MRTA has inaugurated the 28-km extension of the Blue Line served by 19 stations. The entire line has a length of 48 km, served by 38 stations.