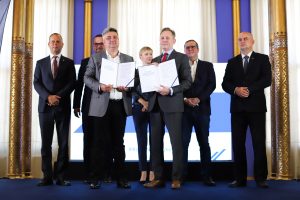 The Solidarity Transport Hub company (Centralny Port Komunikacyjny, CPK) signed a feasibility study contract for the construction of a direct rail link between Łódź and Wrocław, on the Łódź-Sieradz-route which will be designed for speeds of up to 350 km/h. PLN 38.1 million (EUR 8.4 million) is the value of the contract signed with a consortium comprising Multiconsult Polska, Arcadis, Transprojekt Gdański and Idom Inżynieria.

The first construction works are expected to start in 2023 and the new high-speed line will become operational simultaneously with Solidarność Airport.

The 200 km railway is part of the so-called ‘Igrek’ [‘Y shape’] which is implemented by the Central Communication Port.

As part of the contract, the winner will provide the CPK traffic forecasts, as well as specialized analyzes such as the technical, environmental and spatial studies and the preferred route will be identified. 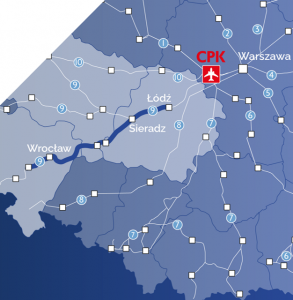 The contract complements the contract for a feasibility study for a 140-kilometer section of high-speed lines from Warsaw through CPK to Łódź, for which the company signed a contract for preparatory works at the beginning of June.

These two lines constitute, together with the branch to Poznań, the so-called “Igrek”, which is the first and most important element of the high-speed rail system in Poland.

Another element of the system within the area is the 60-km section connecting Żarów (located southwest of Wrocław), with Świdnica, Wałbrzych and Lubawka on the Polish-Czech border, for which the CPK signed a contract in August.

After adding up the three sections, the route No. 9 has a total length of 400 km of high-speed lines between Warsaw and the Czech border, via Port Solidarność, Łódź and Wrocław.

The Łódź-Sieradz-Wrocław rail line is another project for which preparatory works have started. In Poland, there are implemented preparation works for 8 railway sections with a total length of 1,000 km. In the case of the No.9 mainline, running through the Mazowieckie, Łódzkie and Dolnośląskie voivodeships preparations are already underway for a total of 400 km, from Warsaw through Łódź and Wrocław to the border with the Czech Republic.

The line will begin in Łódź, crossing Sieradz Północ, Kępno and Czernica Wrocławska, towards Wrocław Główny station and will be operational at a speeds of 250 km/h.

“It is hard to believe, but there is currently no direct rail link between Wrocław and Łódź and Warsaw. It is precisely for this reason that travel times are unattractive and disappointing for passengers. Investments consistently prepared by the CPK are a chance to improve this situation,” Deputy Minister of Infrastructure Marcin Horała said.

After works will be completed, the new line will reduce the travel time from Wrocław to Łódź to 1 hour and 10 minutes and to Warsaw, the travel time will be reduced by almost two hours.