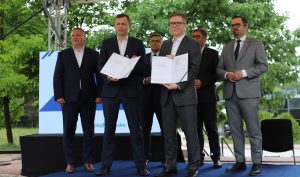 Centralny Port Komunikacyjny (CPK, Solidarity Transport Hub Poland) has signed a contract with a consortium of Egis Poland for a feasibility study on the construction of Katowice – Ostrava rail line. PLN 11 million (EUR 2.4 million) is the value of the contract under which the winner will deliver the study in 11 months with an extension of 5 months as the contract also includes geological documentation and mapping for design purposes. The awarded contract was based on two main criteria: the price represented 70% and 30% considered the experience of the staff. In July, an Egis-lead consortium won another study contract for a new rail line under the CPK.

According to the schedule, the first construction works are expected to start in 2024, and the section of the line connecting the two cities will be put into operation by the end of 2030. The line will be designed for speeds of up to 250 km/h.

The new line will provide Jastrzębie-Zdrój city, in south Poland, access to rail services. The city, with a population of 90,000, is the largest urban area in Poland that does not benefit access to railway network.

The project covers the construction of a 75 km-long line as part of the construction of the Polish section of the railway line between Katowice and Ostrawa. The project will cover the section of the future railway line between Katowice and the border with the Czech Republic and the section Jastrzębie-Zdrój – Wodzisław Śląski with a branch to the planned Jastrzębie-ZdrójCentrum station with connection towards Rybnik and Wodzisław Śląski. 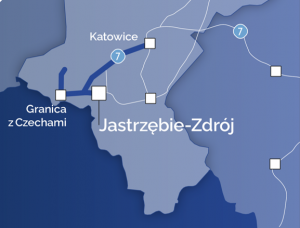 The railway line built by Poland will be extended on the Czech side to Ostrava which will reduce the travel time from Katowice to only 35 minutes, which is one hour shorter than today. CKP and Správa železnic, the rail infrastructure manager of the Czech Republic, have jointly agreed on two potential locations for the high-speed rail cross border connection and the preferred route of border sections.

In Poland, the route is a component of the trans-European TEN-T corridor running from Warsaw through the Central Railway Main Line (CMK) and Katowice, which is modernised by PKP PLK, to the border town of Ostrava. The line is part of the joint investments of the Visegrad Group countries grouped in the KDP V4 project, the purpose of which is to raise the standard of travel and reduce travel times between Warsaw, Brno, with a link to Prague, Bratislava and Budapest.

The pre-project documentation is prepared with the use of co-financing in the amount of over PLN 7 million (EUR 1.5 million), which in 2019 the CPK company received from the CEF.

The new rail link is an important section of the high-speed rail network in Poland which, besides determine the increase of the region’s attractiveness, it will provide the connection with the Visegrad countries. “We are in constant contact with infrastructure managers from the V4 countries, and together we will create a high-speed rail connection between Poland, the Czech Republic, Slovakia and Hungary,” Mikołaj Wild, the President of the CPK company said.

“Thanks to this line, we will provide services to Jastrzębie-Zdrój, the largest Polish city without access to railways. The Katowice – Ostrava rail line is the first for which we have obtained EU funding, winning the competition with other European projects,” said Marcin Horała, the Deputy Minister of Infrastructure and the Government Plenipotentiary for CPK.

As part of the programme, the Silesian Voivodeship will benefit of 100 km of new rail lines which will be built by CPK, while another 246 km of lines will be modernised by the PKP Polskie Linie Kolejowe.
These investments will shorten the journey time from Katowice to Warsaw to 1 hour and 40 minutes, and from Jastrzębie-Zdrój and Rybnik to the capital in just 2 hours. In addition, the capacity of the existing railway lines will increase for meet the needs of regional and freight transport.