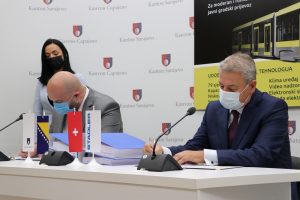 The Canton of Sarajevo and Stadler signed a contract for the design, manufacture and delivery of 15 low-floor tramways. This is the first time Stadler won a contract to supply rail vehicles to Bosnia and Herzegovina. The delivery of the first tramways is scheduled for September 2023 and the remaining LRVs will arrive in the capital by the summer of 2024.

The new LRVs will have a capacity of 180 passengers, 79 of whom can be seated. They will have well-lit passenger compartments, air conditioning and will be equipped with a modern passenger information system and USB ports for mobile phones and other electronic devices. A video surveillance system both inside and outside the trains promotes safety for both passengers and road users and reduces the risk of vandalism. The energy efficient low-floor low-floor tramways will provide increased comfort and safety ensuring a pleasant passenger experience.

The signature ceremony was attended by the representatives of the local government, the Swiss embassy and Stadler, the Transport Minister of the Sarajevo Canton, Adnan Šteta, as well as the EIB Representative for Bosnia and Herzegovina and Montenegro, Sandrine Friscia, and the EBRD Senior Banker, Josip Polić.

According to the EBRD, EUR 35.3 million is the total estimated cost of the project including capital investments and technical cooperation (consultancy services). A sovereign loan of up to EUR 10 million, is awarded to the Canton under the EBRD’s Green Cities Framework 2 Window 2.

The EBRD provided a loan of EUR 35 million for the improvement of the public transport in Sarajevo. A EUR 20 million loan will finance the overhaul of the 19.5 km-long double-track tramline run by the cantonal public transport operator Gradski saobraćaj Sarajevo (GRAS). The current tram network is almost 50 years old and with no major improvements in decades it has deteriorated significantly. New tracks will improve the network and enable the purchase of new, cleaner trams.  The second EBRD loan, of up to EUR 15 million is supporting the procurement of new electric trolleybuses.

In addition to the new low-floor tramways the city agreed to on the procurement of additional trams and trolleybuses. The city has acquired 25 new trolleybuses that should be delivered at the beginning of next year.

The EIB has already allocated EUR 40 million under favourable terms in 2021 for the project to tackle some of the issues that the people of Sarajevo face on a daily basis such as the air pollution, traffic congestion and safety. In October 2020, EIB approved a EUR 75 million loan for the modernisation of city’s tram network.

“The citizens of Sarajevo will feel the significance of the signed agreement. After a decade of waiting, they finally get the public transport they deserve. With the reconstruction of the tram line, the purchase of trolleybuses and trams, we continue with large projects and investments that will create a new, modern face of Sarajevo. We are working on expanding the tram network towards Hrasnica and the trolleybus network towards Vogošća. We estimated that by the end of 2025, we will be able to renew the full capacity of public transport as well as the necessary traffic infrastructure,” the minister said.

Sarajevo did not acquired trams since 1960 and this first contract within six decades represents city’s intention to develop the public transport system.