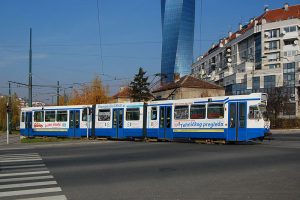 estment Bank has approved a EUR 75 million financing for Sarajevo tram project with a total cost of EUR 185 million.

The financial support will be used for the reconstruction, modernisation and extension of the tram line in the capital of Bosnia and Herzegovina and the trolley bus network.

The project includes the procurement of new trolley busses and trams, the construction of new tram lines and tracks.

The EIB funding will also support the enhancement of the Sarajevo Canton’s strategic road network.

In August, the government has launched a tender to implement Sarajevo tram project comprising the reconstruction of the 8.5 km line between Ilidza and Museji, including the stops. EUR 20 million  will support the project, including the acquisition of consulting services. The contract will be signed at the beginning of 2021.

In February 2020, the EBRD provided Sarajevo a EUR 35 million loan for investments in public transport including the reconstruction of 19.5 km tram line.

A EUR 30 million tender was also launched for the procurement of new trams which is supported by the EIB and the EBRD. The new trams will replace the existing rolling stock fleet comprising Tatra K2 trams.

In 2019, the authorities of approved a EUR 69.5 million funding scheme to modernise capital’s transport system. The Sarajevo tram project included a EUR 41 million funding for the procurement of 20 new trams, while EUR 23.5 million will be used for the extension of the tram line by 6.5 km from Ilidža to Hrasnica. 11 stops will be constructed as part of the tram expansion.  The authorities have also provided EUR 5 million for the modernisation of the trolleybus network.

The city’s tramway network is almost 50 years old and needs funding to improve the tram services as well as the capita’s transport system.