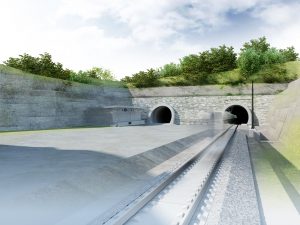 The Management Board and the Supervisory Board of 2TDK, the investor and concession holder of the Divaca-Koper rail project has announced the shortlisted companies for the construction of the Divaca – Črni Kal rail section.

The selected companies are:

For this section, 15 companies and consortia participated at the tender. In total, 29 companies submitted their bids for the entire project which is implemented into two lots.

All candidates recognized as eligible must submit their financial bids for the second phase of the procedure by 1 February 2021. If there are no appeals, the decision will be final within eight working days. All the three selected consortia have been also participated to the tender on the construction of the Črni Kal-Koper railway section.

Currently there are analysed the claims made by several companies for this second rail section. Slovenia’s State Audit Commission has rejected the claims submitted by the Chinese companies as well as the ones submitted by the Turkish consortium consisting of YDA Insaat and Unitek Insaat. On December 15, four more audit requests were on pending at the National Audit Commission. The decision on the recognition of competence for the Črni Kal – Koper section will be made by the contracting authority as soon as possible, 2TDK says.

The Divaca-Koper rail project covers the construction of the second track with a length of 27.1 km-long line including eight tunnels, two viaducts, two bridges and one gallery. 20.5 km or 75 % of the line will consist of tunnels.

The project is estimated at EUR 1.2 billion. The largest portion of the needed investment totalling EUR 522 million is covered by the capital paid in yearly instalments by its owner, the Slovenia Republic. The capital source is largely secured from the highway mark-up collected by the Slovenia’s Motorway Company (DARS), mostly from foreign road transport companies. In December, tDARS received EUR 135 million, while the remaining EUR 387 million is to be paid by 2026, when the construction of the line is expected to be completed. Up to EUR 417 million funding will come from loans provided by the Ifs and commercial banks. In May 2019, European Investment Bank has approved a EUR 250 million financing with the loan contract expected to be signed in the first half of 2021. A EUR 112.5 million credit contract was signed in May 2020 with the NLB for a period of 20 years.

Another funding is coming from the European Union. For the construction of the Divaca-Koper rail, EUR 153.36 million was provided by the Connecting Europe Facility. Through the Cohesion Fund, the EU also provided a EUR 80 million funding.