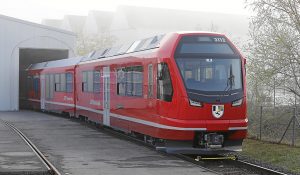 The is an exercised option under a framework agreement signed in 2016 for 36 trains, which was the largest purchase of rolling stock in company’s history.

The Capricorn trains are designed with a maximum speed of 120 km/h. Each train is 76.4 metres long and offers 164 seats, 35 of them in the first class. The view from the driver’s cab is broadcasted to the passenger area, adding a special experience to the passenger journey.

“The Rhaetian Railways and Stadler have been working together over decades already. We’re proud that they have decided to modernise their fleet with our robust and high-quality trains,”Ansgar Brockmeyer, Head of Sales at Stadler,

The Capricorn trains are used as separable multiple units as a train can be divided into two sections in transit. The two partial trains then continue to different destinations. When travelling back in the opposite direction, the two parts are coupled together again to continue their journey. This will allow the half-hourly cycle on the single-track line between Landquart and Klosters to be completed without costly line extensions. To ensure smooth operation of the separable multiple units, the Capricorn trains are equipped with automatic coupling system.

The procurement of new trains is part of Rhaetian Railway 2030 strategy to modernise and harmonise its fleet. The railway operator will have a Capricorn train fleet comprising 56 trains.

The trains operate on the narrow-gauge network of Rhaetian Railway in Grisons Canton, in eastern Switzerland.

In 2019, the new Capricorn EMU was unveiled at Stadler’s Altenrhein factory where the trains are manufactured.