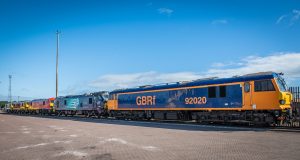 Displaying their electric and hybrid locomotives the operators are committed to contribute to the development of railway transport as the most sustainable transport mode.

“In a UK first, four of the most prominent rail freight companies came together to show their support for decarbonising the logistics supply chain and helping to green the Scottish economy. Electric and hybrid locomotives are not only more sustainable, they are faster, more reliable and attract commercial freight to our modern freight railways,” David Stirling, Director of MIRP operator Peter D Stirling Ltd, said.

“An increasing number of food retailers are now opting for this solution to move their goods, not least because the major railway routes they use can accommodate electric locomotives; for example, 30 trains per week from Daventry to Mossend,” David Stirling stated.

The event coincided with the launch of the Scottish Government’s Green Investment Portfolio, which saw Economy Secretary Fiona Hyslop also at the MIRP site to promote market-ready projects seeking private capital that will help Scotland transition to a net-zero economy by 2045.

In total, ten projects with GBP 1.16 billion (EUR 1.25 billion) of investment potential, from a hydrogen development programme in Aberdeen to a plastic recycling project in Perthshire, are included in the first release of the portfolio launched at Lanarkshire’s Mossend International Railfreight Park.

“The range of opportunities within this portfolio will expand over time to include £3 billion [EUR 3.25 billion] of projects ready for green finance investment, covering sectors from environmentally sustainable commercial real estate to low emission transportation and green energy,” Fiona Hyslop said.

The Scottish Government wants to achieve net zero emissions by 2045, a target that will be reached also by transport decarbonisation programmes and projects with railways at the backbone of the transport system.