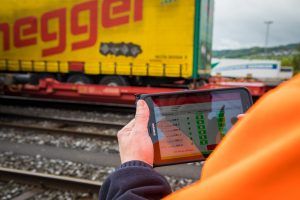 The system for automatic checking of the wagons’ brakes and semi-automated train preparation is in use on more than 200 SBB Cargo freight wagons and 18 DB Cargo wagons as part of the AmaBPro project. Thanks to its design, it is also possible to expand the brake testing system to include future, safety-relevant applications and automated processes.

“Due to the modular concept, our system can be connected with the future DAC with reasonable effort. Whichever European standard will be implemented in 2030, our system will be compatible. Thus, the urgently needed automated brake testing can be rolled out now and not just at the end of the decade,” Günter Petschnig, the CEO of PJM said.

The basis for the automated brake testing is the WaggonTracker system. The digital overall system combines monitoring functions and automated applications such as brake testing or load weight monitoring. Thanks to in-train communication, safety relevant data is transmitted to the train driver during the train journey.

The centre of the WaggonTracker is the hub generator, which autonomously supplies the freight cars with plenty of power and hence facilitates to implement further applications. “In addition, the modular design of the system offers a simple, scalable digital solution that can be adapted exactly to the wagon-specific requirement. Today we have a functioning and reliable automated brake testing system, yet it is the platform for tomorrow’s technical applications”, Günter Petschnig and Martin Joch, CEO of PJM explain.

The automated brake testing system is an innovative solution implemented by an alliance of SBB Cargo, PJM and Rail Cargo Austria. Currently, the system is integrated in real operation by SBB Cargo and RCG has a prototype train equipped with the automated system. Since 2017, the pilot trains have been running at SBB Cargo. By the end of the testing, the wagons will have completed 1,000,000 km. The brake test will be performed 500 times and the brakes of all wagons will have been tested 10,000 times.By now, SBB Cargo has equipped around 200 wagons with the automated brake testing system.

In September 2021 the product development was completed and received the homologation and this spring SBB Cargo is working on series operation. The operational processes are adapted to the new automated system, for example in the areas of training, IT or workshop.

Within the project AmaBPro, a pilot train of DB Cargo will be equipped with the PJM system and then operationally tested. AmaBPro is part of the program “Future Rail Freight Transport” initiated by the Federal Ministry of Transport and Digital Infrastructure. In addition, Mercitalia Intermodal and PJM will launch a pilot train equipped with digital solution for intermodal transport.