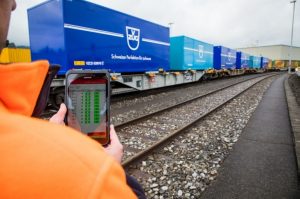 PJ Messtechnik GmbH (PJM), the Austrian specialist for railway system solutions, has completed the technical development of the automated brake test system and the validation is expected to be finalised soon. The system is supposed to go into serial operation by the end of this year.

The automated brake testing is a milestone for digital rail freight transport which on one hand makes rail transport more efficient and faster and on the other hand, it is crucial to increase its attractiveness and subsequently its competitiveness.

“The basic idea for the technical design went far beyond the application of an automatic brake test. We wanted an overall system that fulfills monitoring functions and automates processes,” Günter Petschnig, the CEO of PJM said.

The digital overall system WaggonTracker is the basis platform. WaggonTracker is a monitoring system with autonomous power supply that acts as the base platform and is subsequently used for automating operational processes. In addition, WaggonTracker is freely scalable for further applications, such as the  automatic load weight monitoring or a future Digital Automa­tic Coupling (DAC).

The innovative system brings a 45-minute time saving to check a 500 m-long freight train and at the same time, this signifi­cantly reduces the standing times for both train driver and locomotive.

The rail operator benefits from the advantages as soon as the system has been installed and commissioned providing time savings, faster round trips and fewer personnel as the automated brake test system can be manipulated by one person.

“Automatic brake testing is efficient and a huge gain for rail freight. And it is no longer a vision of the future, but a functioning system for rail transport here and now. The serial operation is imminent. The system is now available and brings immediate, concrete effects for railway companies and a general impact for rail freight transport by gaining attractiveness”, Günter Petschnig, explains.

The automated brake testing system is an in­novation by the development alliance of SBB Cargo, PJM and Rail Cargo Austria. Currently, the system is integrated in real operation by SBB Cargo and RCG and runs a prototype train equipped with the automated system.

This year nearly 100 wagons have seen upgraded and since 2019, 105 wa­gons have been in operation at SBB Cargo.

Within the project AmaBPro, a pilot train of DB Car­go will be equipped with the PJM system and then operationally tested. AmaBPro is part of the program “Future Rail Freight Transport” initiated by the Federal Ministry of Transport and Digital Infrastructure. In addition, Mer­citalia Intermodal will have a pilot train for intermodal transport.

The pilot project started in 2017 and by the end of testing process, 1 million km have been completed. The brake test will be performed 500 times and the brakes of all wagons will have been tested 10,000 times. Since 2018, the pilot train has been in ope­rational testing.

This year PJM has also completed the development of a digi­tal measuring system, an innovative solution which supports the digitalisation of the rail freight transport.