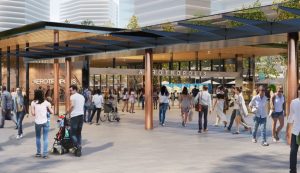 The Government of New South Wales approved the planning of the Sydney Metro – Western Sydney Airport project and major construction is set to commence soon.

In December 2020, early works have started on the line and major work will start in the coming months. Three consortia have been shortlisted for the tunnelling contract which is expected to be awarded by the end of the year and tunnel boring machines in the ground by the end of 2023. In June, the government has launched the tender for the operation contract.

The project will support 14,000 jobs, including 250 apprentices.

The Australian and NSW governments are jointly delivering the new metro railway line served by six stations between St Marys and the Western Sydney Aerotropolis, including two stations at the airport.

The stations at Orchard Hills and Luddenham will service a future mixed-use precinct and an education and innovation precinct.

Commonwealth Government approvals for Sydney Metro’s rail development work within the boundary of Western Sydney International Airport are expected in the coming months.

It is expected to transport up to 7,740 passengers each hour in each direction, while also taking about 110,000 vehicles off local roads every day, significantly reducing local traffic.

The new metro line will become the transport spine for Greater Western Sydney, connecting communities and travellers with the new Nancy-Bird Walton Airport and the growing region.

Sydney’s new metro services are already connecting people between the city’s North West at Rouse Hill and Chatswood, and in 2024 Sydney Metro will extend under Sydney Harbour, through to new stations in the central business district (CBD), and beyond to the South West at Bankstown.