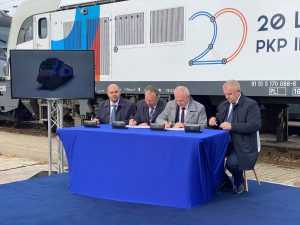 PKP Intercity and Newag signed a contract for the supply of 10 new multi-system electric locomotives able to run at a speed of 200 km/h. PLN 258.6 million (EUR 56 million) is the value of the contract which includes an option for five additional vehicles and the provision of technical maintenance services.

Under the contract, Newag will have to deliver all the locomotives within 42 months with the delivery of the first vehicle within 18 months.

The new locomotives will be able to run on the railway lines with power supply systems with different voltages (3kV DC, 15kV AC, 25kV AC).

Newag will also have to obtain approval for operation of the vehicles in Poland, Germany, Austria, the Czech Republic, Slovakia and Hungary.

All locomotives will be equipped with the ETCS Level 2, which significantly increases the safety standards on the tracks. The vehicles will also have a remote diagnostics system that will allow the locomotives to be monitored in real time, which will translate into their efficient operation.

“The capabilities of modern multi-system locomotives will allow for faster journeys thanks to the use of modernised rail lines, and in the future also new lines. The vehicles will serve both domestic and international routes, which will give us the opportunity to expand the offer of foreign connections. The expansion of the rolling stock park with additional electric vehicles will be another step on our way to achieving climate neutrality,” Marek Chraniek, the President of the Management Board of PKP Intercity said.

The new multi-system electric locomotives will run on modernised and new lines in Poland such as the rail connections between Warsaw and Gdynia, Poznań, Wrocław, Katowice and Krakow. They will also serve four international routes especially the train connection to Berlin.

After obtaining the approval in Germany and the Czech Republic, the locomotives are planned to enter operation on the on the following international routes:

Gdynia – Warsaw – Katowice – Vienna (on the section to Bohumin).

These will be the first Newag multi-system locomotives acquired by PKP Intercity. The rail operator has previously ordered EU160 Griffin locomotives that at the end of 2020 brought PKP Intercity’s modern electric locomotive fleet to 30 vehicles running at up to 160 km/h. The basing contract was signed in 2018 for 30 locomotives and in 2019 the operator ordered 10 additional units. PLN 551.4 million (EUR 119.2 million) was the total value of the contract which includes the delivery of maintenance services.

PKP Intercity is currently implementing its largest rolling stock modernisation programme. In June, the Polish operator has launched a tender for the acquisition of 63 multi-system electric locomotives able to run at a speed of 200 km/h. The contract also includes options for 32 additional locomotives.

As part of its plan, the company will invest PLN 19 billion (EUR 4 billion) for the modernisation and procurement of new rolling stock until 2030.