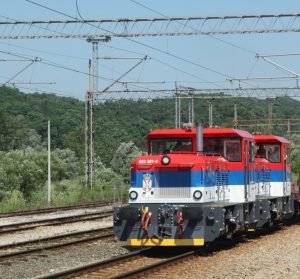 PKP Intercity has signed a contract for the procurement of 10 new diesel shunting locomotives expected to be delivered within two years.

PKP Intercity and CZ Loko signed a contract for the supply of 10 new diesel shunting locomotives with a total value of PLN 40 million (EUR 8.9 million). The Czech rail manufacturer will also provide a four-year warranty for the new EffiShunter 300 locomotives.

“We care not only about the reconstruction of stations, the modernisation of railway lines and the provision of a fleet of modern trains, but we also invest in infrastructure and rolling stock for the technical maintenance of trains,” Krzysztof Mamiński, President of the Management Board of PKP Group, said.

The contract will be performed for a period of 24 months from the date of its signing, and the delivery of the first locomotive will take place within 18 months, and the locomotive fleet will be delivered within two years. They will be deployed at important railway junctions such as Warsaw, Gdańsk, Wroclaw, Katowice and Krakow.

EffiShunter 300 is a light two-axle locomotive designed with the lowest possible production and operating costs in mind. It is equipped with a CAT C13 diesel engine with an output of 328 kW meeting the strictest EU Stage V emission standards. For operation in Poland, it will also be equipped with the Polish national train control system SHP. Upon special request, PKP Intercity will also receive a loudspeaker function for the driver’s cab.

“PKP Intercity’s investments serve the comfort of passengers, but also the efficiency of the daily service of the rolling stock, which has a huge impact on the quality of services provided. This is another step closer to the goal of a safe, comfortable and predictable railway,” Andrzej Bittel, the Secretary of State at the Ministry of Infrastructure, said.

The procurement of these diesel shunting locomotives is part of the largest investment program in the company’s history. The operator’s 2030 plan involves the procurement and modernisation of its rolling stock fleet with a total investment of PLN 19 billion (EUR 4.2 billion). The programme includes investments in coaches, modern locomotives, electric multiple units, as well as push-pull double-decker cars.

Massive investments in modern trains will drive the further development of railways as the most ecological means of the public transport, in line with the European Green Deal objectives.

As a result, the PKP Intercity’s fleet will be powered by new electric vehicles with significantly lower CO2 emissions, and the appropriate number and quality of rolling stock adapted to the modernised railway lines will allow the creation of a coherent transport network for the entire country. In 2030, the entire PKP Intercity fleet will be new or modernised, which will ensure a high level of travel safety and comfort.