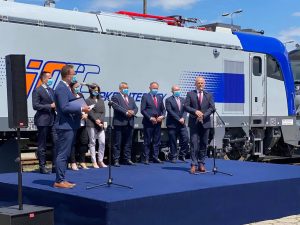 Newag handed over the final EU160 Griffin locomotive to PKP Intercity under a PLN 367.6 million (EUR 82.4 million) contract for the supply of 20 locomotives signed in May 2018. In September 2019, the Polish rail passenger operator has exercised an option for 10 additional Griffins expected to be delivered in two years from contract signing.

In total, Newag will deliver 30 Griffin locomotives with a value of PLN 551.4 million (EUR 123.6 million). PLN 79.1 million (EUR 17.74 million) is the value of the European co-financing for the procurement of the locomotives. The EU funding is provided through the Operational Programme Infrastructure and Environment. According to the agreement, the remaining 10 Griffin locomotives will be delivered to PKP Intercity by the end of this year.

“Further purchases of modern rolling stock bring us closer to the goal of safe, predictable and comfortable rail transport,” Andrzej Adamczyk, the Minister of Infrastructure said.

Under the contract, Newag conducts training for the employees for vehicle service, provision of their maintenance services at the second, third and fourth levels, and provision of warranty services for the repair of locomotives at the fourth maintenance level.

The new locomotives are able to run at speeds of up to 160 km/h with increased energy efficiency, reliability and flexibility. The EU160 Griffin locomotive is the most modern electric vehicle in Poland. The electric locomotives meet the Technical Specification for Interoperability and are equipped with the ETCS Level 1 and 2 system significantly increasing the safety standards. The are also ecuipped with remote diagnostic system to monitor the operation of locomotives in real time.

“The investments currently implemented by the PKP Group companies assume a holistic view of the Polish railway transport. Thanks to the synergy effect achieved, modern trains will be able to fully use their technical capabilities on modernised railway lines,” said Krzysztof Mamiński, the President of PKP Group.

The procurement of the 30 new locomotives is part of PKP Intercity strategy for rolling stock renewal estimated at PLN 7 billion (EUR 1.57 billion). By 2023, when the programme will be completed, 80% of operator’s fleet will be new or modernised, with 94% being equipped with air conditioning system and 77% with Wi-Fi devices.