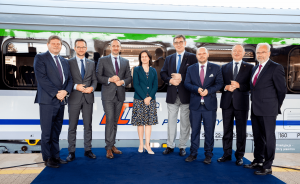 Through this delivery, the Polish rolling stock manufacturer has completed the PLN 312 million (EUR 70.76 million) contract to modernise operator’s 83 type 111A-20 passenger cars.

The cars are equipped with air conditioning system, electric sockets and Wi-Fi connection and have more comfortable seats. The modernisation also included the installation of monitoring, GSM/LTE signal amplifiers.The vehicles have been soundproofed, which provides additional travel comfort.The numbers of seats and shelves, symbols in the toilets, and buttons for door opening are marked with Braillesymbols. The wagons have 72 seats.

The cars will be put in operation on eight railway routes serving Szczecin, Warsaw, Lublin, Terespol and Piła connections.

The contract was awarded in April 2018 to a consortium comprising Pesa Bydgoszcz and Mińsk Mazowiecki, a rolling stock repair and maintenance services provider acquired by Pesa.

PKP Intercity has exercised an option in November 2018 to modernise a fleet of 42 coaches. PLN 470 million (EUR 106.6 million) is the total value of the contract for the delivery of 125 modernised coaches. This latest delivery is part of the basic contract signed between the companies. The remaining modernised fleet is expected to be delivered by the end of this year.

“Through these investments, the railway transport returns to its rightful place and keeps strengthening its position. We are getting closer to the goal of a safe, predictable and comfortable railway. And the implementation of subsequent rolling stock modernisation projects consistently brings us closer to this,” Andrzej Bittel, the Secretary of the Ministry of Infrastructure, said. 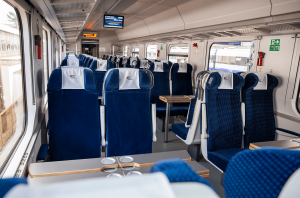 PKP Intercity and Pesa have concluded three car modernisation contracts comprising 245 cars which are to be delivered in different phases. PLN 1 billion (EUR 233.6 million) is the total value of these contracts which are supported by the EU funding.

The modernisation of the 125 passenger cars is funded by the European Union under Poland’s Infrastructure and Environment Operational Programme as part of PKP Intercity’s modernisation and procurement of new rolling stock project. The maximum value of the funding granted for the modernisation of these cars is PLN 140.29 million (EUR 31.8 million). Under this operational programme, PKP Intercity has obtained a total European financing of PLN 653.73 million (EUR 148.26 million).

The long-distance rail operator invests PLN 7 billion (EUR 1.59 billion) for the modernisation of its existing fleet and for the procurement of new trains and coaches to increase passenger comfort and safety while reducing travel times. The programme will be completed by 2023 when the operator’s fleet will be 80% modernised, with 94% of the fleet being equipped with air conditioning systems and 77% equipped with Wi-Fi connection.