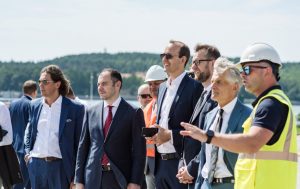 The Minister of Infrastructure of Ukraine Oleksandr Kubrakov and the Minister of Transport and Communications of Lithuania Marius Skuodis met in Klaipeda and discussed on the possibility to create a single railway route between the Black Sea and Baltic regions which will develop the multimodal freight transport.

“Partnership in the field of transport is one of the priorities. We are resuming dialogue on the implementation of an old idea covering the connection of the Baltic and Black Sea regions by rail. This is a chance for both countries to optimise logistics, increase the load on seaports and ensure access on new world markets,” the Ukrainian Minister of Infrastructure said.

The two sides agreed to develop a multimodal transport pilot project by increasing the flow of semi-trailers, as part of the transport connection between the two countries. The pilot project is planned to be launched in September this year.

For the implementation of multimodal freight transport by sea and rail will be used, in particular, the semi-trailers as intermodal transport units. To make this possible, Ukraine is initiating changes to the legislation to allow semi-trailers to be classified as cargo and not as a vehicle.

“One of the important transport development projects is to launch a rail transport service of semi-trailers from Ukraine and Turkey to Lithuania and from Lithuania further the North. For this to become a reality, Ukraine needs a very little change in the legislation so that semi-trailers are not treated as a vehicle but as a load. We talked to the Minister of Ukraine not to wait for changes in legislation, but to start with pilot projects,” Skuodis said.

The successful implementation of the agreement has the potential to make Klaipeda port in Lithuania the northern gate of Ukraine to Scandinavian countries, while Odesa will be the southern sea gate of Lithuania to the Black Sea region.

Currently, there are large freight flows between the Baltic and Black Sea regions, but the share of goods moving from Ukraine to the regions is very low. At the port of Klaipeda, Ukrainian cargo accounts only 1-2% of all cargo volumes. According to the Lithuanian side, the flow of goods from Ukraine could potentially be ten times higher.

As part of the efforts to develop the transport connections, in 2018, the ‘Four Capitals train’ route for passenger transport was launched between Kiev, Minsk, Vilnius and Riga.