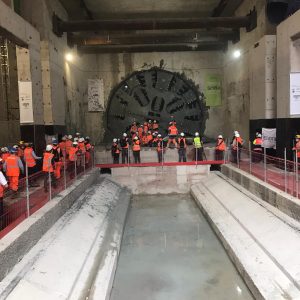 RATP has announced the completion of 3 km tunnel excavation of Paris Line 11 extension which will be 6 km – long connecting Mairie des Lilas and Rosny-Bois Perrier station.

The Sofia tunnel boring machine has arrived the site of the new Serge Gainsbourg station (Les Lilas) marking the end of the tunnel digging and structural work for the entire 6 km extension.

The Sofia TBM took 15 months to complete the excavation of 3 km travelling at around 14 metres per day. It will connect the 4 future stations Serge Gainsbourg, Place Carnot, Montreuil-Hôpital and La Dhuys. To connect the current line and the extension line, a 250-meter tunnel had been previously dug using a traditional method from the Mairie des Lilas station to the future Serge Gainsbourg station. In addition, the viaduct of the future Coteaux Beauclair station and the rectangular Rosny-Bois Perrier tunnel are also connected.

The future Serge Gainsbourg station, situated in the heart of a large residential area offering access to the metro system to the inhabitants of Les Lilas, in the northern-eastern suburbs of Paris, will accommodate 15,000 passengers per day.

The track laying has started between the future train maintenance workshop and the future Rosny-Bois Perrier station for which the construction of has been completed. A 600-metre viaduct and the Côteaux-Beauclair station’s glass roof have been installed.

The line will be operated by the M14 five-car trains delivered by Alstom to replace the existing four-car trains. The new metro trains are currently tested on the Line 1 and when completed, they will also enter trials on the Line 11 extension.

The current train maintenance workshop, located in Les Lilas, will be moved to the newly built Rosny-sous-Bois that will be operational by the end of his year. The new workshop is designed to accommodate the new high -capacity trains.

The Paris Line 11 extension project involves an investment of EUR 1.3 billion (in 2014 prices) and is carried out by the RATP responsible for the designs and works while Île-de-France Mobilités organise the transport services to ensure the compliance with the train schedule and the costs. The project is financed by the State, Île-de-France Region, Société du Grand Paris, Seine Departmental Council Saint-Denis, RATP and the City of Paris.

The extension, served by six new stations is expected to enter passenger operation in 2023 when will reduce the travel time between Rosny-Bois Perrier and Châtelet to 24 minutes, from currently 55 minutes.