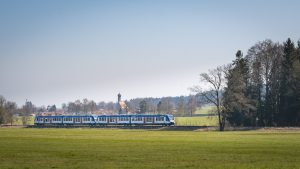 Alpha Trains decided to acquire 9 Coradia Lint trains from Alstom which will be added to a fleet of 22 same type multiple units to serve the Oberland network in Bavaria.

In a sale and lease-back transaction, Transdev sold 22 Coradia Lint 54 type new trains recently delivered to Alpha Trains and leased the vehicles back in a long-term lease agreement.

The lessee of the total of 31 multiple units is Bayerische Oberlandbahn GmbH, a wholly owned subsidiary of the Transdev Group. The 31 identical vehicles can be coupled together as required, thus enabling flexible deployment in line with fluctuating passenger volumes.

The vehicles will be successively put into service under the new BRB (Bayerische Regiobahn) umbrella brand.

The first trains have been in operation in the Oberland network since June 2020. All of these vehicles should be operating by the end of the year.

The vehicles will be replaced during the current transport concession contract with the Bayerische Eisenbahngesellschaft (BEG), which plans, finances and controls local rail passenger transport in the Free State of Bavaria. The existing fleet will be replaced by 25 new Coradia Lint vehicles at the expense of the Transdev Group, while the Free State will enable capacity and supply to be expanded with six additional new vehicles. The vehicles used up to now, including Talent multiple-unit trains manufactured by Bombardier, will go back to the owner Alpha Trains for further leasing.

The capacity expansion and the use of more modern multiple units will improve the transport services in the Bavarian Oberland area in terms of reliability, punctuality and equipment.

The new trains offer passengers free Wi-Fi and power sockets and are equipped with state-of-the-art passenger information and accessible boarding systems in accordance with the latest EU standard.

Despite their diesel engines, the low-emission, low-noise multiple units generate significantly lower emissions than previously trains, with a 90% reduction of nitrogen oxide and almost no particulate matter.

“We are delighted to have found a convincing solution for improving rail transport in the Bavarian Oberland together with our long-standing partner Transdev. Once again it is clear that the flexibility of rolling stock leasing is the only way to implement future mobility concepts in times of rapid demographic and technological change,” Shaun Mills, CEO of the Alpha Trains Group, said.