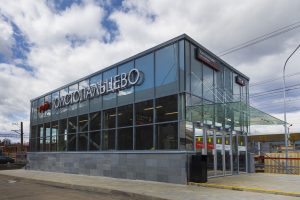 The Moscow City has opened a new future MCD-4 station, by completing the renovation of Tolstopaltsevo suburban railway station on May 1, 2022, in the west of the capital.

From an outdated stop, with one cash register on a single platform, it has been transformed into a new modern railway station. The reconstruction of the station was carried out without stopping the train traffic.

The reconstructed suburban railway station is popular among residents of two adjacent villages, where 26.3 thousand people live together, 1.3 thousand of them within walking distance from the station. The renovation of the station is a part of a programme of the transport accessibility improvement of the New Moscow (the remote district to the south of Moscow) territory.

Now Tolstopaltsevo is a modern suburban railway station with an underground vestibule with an area of 1.8 thousand square meters. In the lobby, there are two ticket offices, including one with a lowered window for passengers with disabilities, electronic displays, turnstiles and a toilet room. For the safety of passengers, an underground pedestrian crossing has been made across the railway tracks with a length of 64 m, where an elevator and escalators are installed to the new platform exit and elevators to the street exit. The new island platform is covered with a full-length canopy to protect passengers from precipitation. Curtains and infrared heaters are also installed at the station to keep passengers warm in the harsh Russian frosts. For the convenience of passengers with disabilities there was created a barrier-free environment.

Tolstopaltsevo passengers will receive a new overground metro station with a convenient fare payment system with a Troika card, unified city tariffs, integration with the metro and the Moscow Central Circle (MCC) and free interchanges.

According to Moscow transport modern standards, the adjacent territory of the suburban railway station will be improved. There will be new bus stops and taxi kiss&ride stands, convenient pedestrian approaches to the station will be provided, a new parking for 32 places will appear in addition to the existing one.

When opened, the MCD-4 will be the longest of Moscow’s diameter lines with a length of 86 km and features the largest number of the interchanging stations. There will be 39 stations on the 4th diameter. From 18 of them passengers will have 35 interchange options to the metro, the MCC and other diameters. The daily prospective flow of the MCD-4 may reach 455 thousand people, which is 84% more than the current figure. Inside of the capital, it will be used by up to 30 million people per year, and in total, more than 162 million passengers per year.