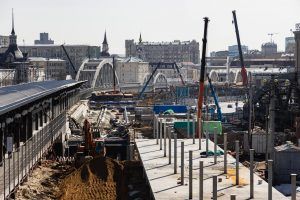 The track and station construction work on Moscow’s MCD-3 and MCD-4 are being carried following the plan approval by the Moscow municipality and the Russian Railways.

In addition, the plans include a rolling stock procurement programme and the renewal of suburban electric trains fleet with the Ivolga and EP2D trains. “We will try to do everything so that the number of the trains that operate on the routes to be completely replaced as soon as possible by the MCD-3 and MCD-4 launch,” Maksim Liksutov, the Deputy Mayor of Moscow for Transport said.

The MCD-3 Leningrad-Kazansky will pass through the capital from the northwest to the southeast crossing 24 Moscow districts. The 85 km line will have 42 stations, 14 of which will have interchanges to metro, the MCC and suburban rail system. The MCD-4 Kievsko-Gorkovsky will cross the capital from west to east. It will be the longest transport artery in Moscow, with a length of 86 km. There will be 39 stations on the MCD-4, 18 of which will be interchangeable, with 35 interchange options to metro, the MCC and other diameters.

The Moscow Railways routes, which have become the part of the MCD-1 and MCD-2, existed before the Moscow Central Diameter project launch. The MCD-3 and MCD-4 implementation creates entirely new routes and the railway lines are connected in the city centre, creating transport arteries running through the entire city.

In order to prepare for the MCD-3 launch, the 4 km Mitkovskaya connecting line is being reconstructed to connect the Leningradskoe and Kazanskoe directions. After the MCD-3 launch trains will run to Leningradsky and Kazansky railway stations, like it is operating nowadays, and on the diameter through the capital centre. For the new transport artery development, the MCD-4, the connecting branch is being built from the scratch, it will connect the two directions to Kievskoe and Gorkovskoe.

In general, global work is carried out to develop the existing infrastructure in the Russian city centre, in various parts of the capital and in almost all the directions. It is impossible to launch the future MCD-3 and MCD-4 without this work, as well as to increase the intensity of the traffic on the MCD-1 and MCD-2.

The authorities are also conducting the construction of passenger terminals. 10 stations are planned to be reconstructed and build on the perspective and existing diameters this year. One of them has already been opened – the new Minskaya suburban station on the future MCD-4. Five more stations will be opened after the reconstruction on the MCD-4 and one station will be opened on the MCD-1 – the Timiryazevskaya station and the integration of the MCD-1 Okruzhnaya station with the Moscow Central Circle (MCC). In addition, two new suburban stations (Pechatniki and Maryina Roscha) will be opened on the MCD-2.

The new Maryina Roscha MCD-2 station will become the basic for the large hub on the north of the capital. Passengers will be able to make interchanges to the 11 surface routes and on the Line 10 of the Moscow Metro. In future, there will be the Big Circle Line (BCL) and the MCD-4 stations. The local residents living near the station will get more route options, and the MCD-2 passengers will get the new interchanging station. The MCD-2 Pechatniki station will become the part of the largest hub on the southeast of Moscow. The hub will connect the Line 10 of the Moscow Metro, the BCL, MCD-2 and the surface public transport.

In addition, the infrastructure in the Moscow region is also developing. Following the development of Ippodrom station, a MCD-3 terminal station situated in southeast of Moscow region in the Ramenskoye city, the daily passenger traffic will increase to 4.6 thousand from currently 3.3 thousand passengers.

Zheleznodorozhnaya, the terminal station of the future MCD-4 located in one of the largest cities in Moscow region – Balashikha is also being reconstructed and will be the fastest way to reach the Moscow centre. The new Olgino station will be redesigned and reconstructed to allow an increased passenger volume to travel from Balashikha city to the capital centre.

Moscow intends to start the passenger operation on the MCD-3 and MCD-4 by the end of 2023.

The existing 52 km MCD-1 served by 25 stations and the 80 km with 35 station MCD-2 are providing metro and MCC connections through 21 interchange stations. The two MCDs have been opened in 2019.