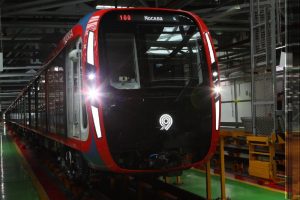 Moscow Metro has received the 100th new generation of Moskva-2020 train at Solntsevo depot and after all the needed inspections, the new train will operate on Line 6 of the Moscow Metro.

Since 2018, Moscow Metro announced that the Line 6 (Kaluzhsko – Rizhskaya Line) will be operated only by new rolling stock to provide increased capacity for this line which links the city on northeast – southwest axis.

The new trains manufactured by Transmashholding are more convenient and spacious for passengers than its predecessors. In new trains noise level was reduced by 15%, they also have a wider inter-car transition which is 1,6 metres. At the same time, new trains have a larger capacity as the doors are 15% wider than those of Moskva model and 28% wider than those of Rusich model. Trains are also equipped with 368 USB chargers and 32 overhead console-mounted data displays.

“We continue to renew the metro car fleet. Today, almost 70% of metro passengers travel in new comfortable trains, which are produced by the Russian factory Metrowagonmash [part of Transmashholding]. The manufacturer itself maintains the cars for 30 years under the life cycle contract,” Maksim Liksutov, the Deputy Mayor of Moscow for Transport said.

The department highlights that this kind of contract, which stipulates the provision of maintenance services for the trains’ life cycle, has saved more than RUB 10 billion (USD 119.68 million).

In October 2020, Sergei Sobyanin, the Mayor of Moscow has unveiled the new Moskva-2020 train fleet with plans to remove the old rolling stock on the Line 5 (Koltsevaya Line) and Line 6.

Until 2024, city’s authorities intend to acquire more than 1,300 Moskva-2020 cars meaning that the metro train fleet will be up to 80% renewed. In February, the Moscow Municipality announced that 70% of city’s metro train fleet was already renewed.

Within the next two years, the Moscow Metro train fleet would be the youngest in Europe with an average age of the trains being reduced to 10 years. In 2022 and 2023, the Moscow Metro will receive about 660 new cars.