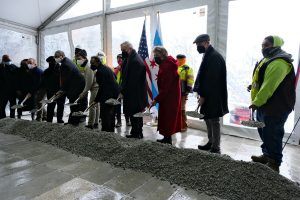 The North Belmont Red-Purple reconstruction project will remove a curvature in the tracks between Belmont and Addison station, allowing CTA to improve its service throughout the transit system.

The Red-Purple Bypass carries the Kimball-bound (northbound) Brown Line trains over north-and southbound Red and Purple Line tracks just north of Belmont station. It replaces the antiquated Clark Junction that was built in 1907 to connect what was then the Ravenswood Line (today called the Brown Line) to the Red and Purple lines, which began rail service in 1900.

The new Red-Purple Bypass is an important part of CTA’s work to improve Red Line service throughout the region. The bypass eliminates a 115-year-old rail junction that had become a chokepoint for service across the CTA rail system and will allow authority to add rail service during busy travel periods and reduce overcrowding and delays.

”The reconstruction of the Red Line in our transport and trail system has been long overdue. Our city and our residents deserve an easily accessible and reliable CTA commute, and I’m thrilled to see the continued improvement and modernisation of one of the busiest ‘L’ lines,” Mayor Lightfoot said.

The Red-Purple Bypass, which began service in November 2021, is the first major improvement to be delivered to CTA customers as part of the USD 2.1 billion Red and Purple Modernisation (RPM) Phase One project.

The RPM covers the modernisation and replacement of 100-year-old rail structures and stations to improve rail service reliability, comfort and convenience for CTA customers. The new bypass is the first new, permanent mainline track to be added to CTA since the Orange Line opened in 1993. RPM is the latest project to modernise the Red Line, CTA’s busiest line that serves more than 30 percent of all rail customers.

Beginning February 2022, CTA will demolish, rebuild and realign the 100-year-old Red and Purple Line tracks between Belmont station and W Cornelia Ave. The Red and Purple tracks north of Belmont are more than a century old and contain a curve that slows train speeds.

By rebuilding these structures, CTA can increase train speeds and improve service reliability, and comfort. This work is expected to begin next month and continue through 2025.

The first phase of RPM includes three main projects covering the new rail bypass, the reconstruction of four stations on the Red Line and replacing 10 km of tracks which will be completed in 2024. The programme also includes the installation of a new signalling system on 37 km tracks between Howard and Belmont to improve train flow and service reliability.