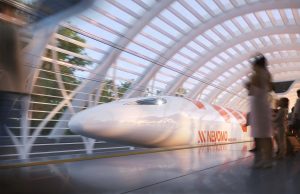 The magrail innovative technology may play an important role in railway investment projects and for the achievement of the European Green Deal objectives, a report prepared by Idom and Nevomo says.

The two companies carried out analysis on how magrail technology would perform on the first Polish high-speed rail line between Warsaw, Lodz Poznan, and Wroclaw (so-called Y Line). According to the report, the economic benefits of implementing the magrail technology in the main rail corridor in Poland would be significant and bring a positive economic return within 30 years.

According to the report, the economic benefits of implementing the magrail technology in the main rail corridor in Poland would be significant.

EUR 12.6 billion is the total value of the investment which would comprise EUR 7.5 billion for basic underlying HSR infrastructure and of additional EUR 5.1 billion on magrail components comprising the infrastructure and vehicles, and it would bring a positive economic return within 30 years.

Based on the analysis, the total economic benefits for the society would amount to EUR 4.3 billion, and benefit/cost ratio for this investment would reach 1.42. Economic Net Present Value (ENPV) of the project would reach EUR 1.3 billion which gives an Economic Rate of Return (ERR) of 4.01%.

“It is vital to put this study and the magrail innovative technology within a broader context. The results of the analysis and the created assumptions can be extended to the whole country and even broader, to the substantial part of Europe. For example, a further extension of the “Y Line” from Poznan to Berlin, new lines to new international airport Solidarity Transport Hub as well as new HSR projects in Europe like Berlin – Prague – Vienna line could also potentially be a good fit for magrail technology,” Michał Litwin, Strategy Director at Nevomo said.

This year, Nevomo has announced it has completed the first tests on a medium-sized track.