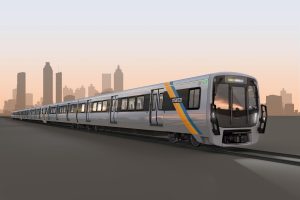 The initial deliveries from Knorr Brake Company are expected in the first quarter of 2022 and will run through the close of 2028.

“A robust technical design, light-weight solutions to help enable energy efficiency, and the power of our proven technologies and technical support were among the winning factors in the order’s tender process,” Jason Connell, President and CEO of Knorr Brake Company said.

While most of the braking components will be produced at KBC’s Westminster facility in northern Maryland, the vehicles will be manufactured by Stadler at its new Salt Lake City, Utah plant opened in May 2019. Here Stadler constructs the seven-car Kiss double-deck EMUs for California’s Caltrain operator.

In November 2019, Marta and Stadler signed a EUR 600 million contract to deliver 127 metro trains which also includes an option for 25 additional trains. The new trains will replace the existing fleet.

The first trains are expected to enter passenger services in 2023.