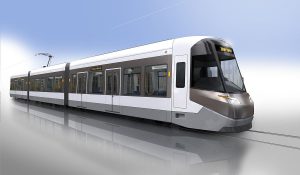 Verkehrsbetriebe Karlsruhe (VBK), the public transport company of Karlsruhe, may receive from the European Investment Bank a EUR 150 million financing for the acquisition of 73 CityLink tram-trains. The bank is assessing VBK’s procurement estimated at EUR 326 million.

The public transport authority will acquire from Stadler 73 tram-trains expected to be delivered from 2026 and the contract also includes an option for 52 additional vehicles.

The project is part of a common tender launched by six transport companies from Austria and Germany for the acquisition of a total fleet of 504 vehicles. The EUR 4 billion contract was awarded to Stadler with a firm order for the delivery of 246 CityLink tram-trains.

All vehicles will be supplied in a three-section design. Under the VBK requirements, the trains will be designed as a single-system vehicle to operate the inner-city network. The length of the vehicles, the number of doors, the boarding and coupling height as well as the configuration of the CityLink tram-trains versions will vary depending on the delivery location and the customer.

All the vehicles will have certain features in common. They all will be equipped with an HVAC system for the passenger compartments and driver’s cab and will have spacious multi-purpose areas with two wheelchair spaces that can be flexibly configured.

The tram-trains will be individually equipped to suit the place of use, in accordance with the specifications made by each of the public transport company – Verkehrsbetriebe Karlsruhe (VBK), Albtal-Verkehrs-Gesellschaft (AVG), Saarbahn Netz, Schiene Oberösterreich, the State of Salzburg and Zweckverband Regional-Stadtbahn Neckar-Alb.

From Stadler in consortium with Kiepe Electric, Karlsruhe also acquired CityLink tram-trains under a contract signed in 2011 for the supply of 75 vehicles with a length of 37.2 metres. The last one has been delivered in 2019.

The new tram-trains will be manufactured in in Valencia, Spain, where also the Citylink vehicles are produced.