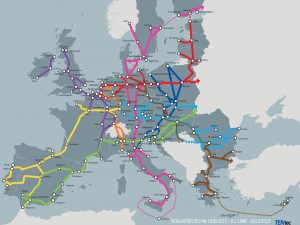 Following ECA’s report on eight cross-border transport projects, the nine European Coordinators for the TEN-T Core Network corridors made a statement highlighting that the completion of the network by 2030 is necessary and “indispensable” for the European recovery.

‘All Member States have committed to realising the TEN-T Core Network by 2030. This means addressing important bottlenecks and key missing links across Europe, especially where cross-border connections are inexistent or unable to cater for modern transport needs. The crisis demonstrated the importance and value of those cross-border connections and transport infrastructures have a key role to play in the economic recovery,’ the statement says.

The coordinators confirm that the eight projects assessed by the European Court of Auditors in its latest report on EU transport infrastructure, are in a good progress and they are following the projects ‘very closely. They are complex projects, which mature over a long time cycle, not least as a result of public consultations. This is true for all large transport infrastructure projects, but especially so for cross-border projects involving several Member States with sometimes very different approaches to the preparation and management of these major projects.’

ECA’s selected projects are some missing links of the EU transport network and ‘that is why the evaluation of their socio-economic impacts must go beyond the simple summing up of national impacts. The evaluation instruments must be adapted to the transnational reality of the corridors.

The projects have already received European funding many of them being unable to proceed without EU support, which is a vital for projects’ implementation.  The coordinators make obvious that for similar projects such as Öresund Bridge and the high-speed rail connections between Amsterdam, Brussels, Paris, London and Cologne the EU financial support was decisive for their success.

The Coordinators say that they will continue to collaborate with the national authorities and project promoters to ensure the on time and on budget delivery of the TEN-T projects to create the TEN-T Core Network by 2030 which will allow seamless transport services across the EU for both passengers and freight.

An important step was reached last week when the European Parliament and Council agreed to streamline permit granting procedures in order to reduce the administrative burden and lead times for especially cross-border projects.

On June 17, the European Council has announced that the member states’ ambassadors endorsed new rules to speed up the completion of the TEN-T by streamlining permit-granting processes. A maximum time limit of four years will apply to the entire permit-granting process. This period can be extended twice in duly justified cases.

The ‘smart TEN-T’ proposal also clarifies the procedures which project promoters need to follow as regards permit granting and public procurement for cross-border projects. The new rules had been provisionally agreed by the Council presidency and the European Parliament, on 8 June.

The co-legislators agreed that the legal format of the text will be a directive, instead of a regulation as proposed by the Commission. This will give member states the necessary flexibility to take advantage of their existing permit-granting procedures. The directive will cover projects that are part of pre-identified sections of the TEN-T core network. It will also cover other projects on the core network corridors with a total cost exceeding EUR 300 million. Projects exclusively related to telematics and other new technologies will be excluded from the scope, as their deployment is not limited to the TEN-T core network

“Clearer, faster and more efficient procedures to improve key European transport links will help us complete the TEN-T core network by 2030. This will boost connectivity across Europe and contribute to smart and sustainable growth, which is crucial for the post-pandemic recovery,” said
Oleg Butković, Croatian Transport Minister and President of the Council.

On June 16, the European Court of Auditor has published a report which founds that the Core Network is unlikely to be operational by 2030. The conclusion is based on eight analysed projects of which six will not be completed in time. The report also emphasizes four of recommendations to support long term planning, management and implementation of the projects which include cross-border motorways, railways and waterways.