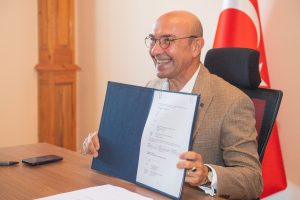 During a video conference, the Mayor of Izmir Tunc Soyer and Sue Barrett, the EBRD Head of Infrastructure for Turkey, Middle East & Africa, signed a EUR 125 million financial agreement for the construction of Üçyol – Buca metro line.

“Our project will radically solve the traffic problem of Buca, the most congested district of our city. The new metro line will connect with other urban transport links, promote modern, fast, eco-friendly and safe commute, create employment and attract investors,” the mayor said.

The project is estimated at EUR 1.7 billion and covers the construction of a 13.5 km-long line, 11 underground stations and a depot and a workshop facility.

The construction works are planned to start by the end of this year and are expected to be completed in four years.

The new line will start from the existing Üçyol station (on the Fahrettin Altay-Evka 3 Line) to the Dokuz Eylül University – Çamlıkule, the eastern terminus of Buca Metro line.

The international tender for the construction of the new metro line was launched in January 2020 and 14 domestic and foreign companies and consortia submitted their qualification files. 13 bidders have been qualified and were invited to the second stage which will take place on August 27. At the end of the evaluation, the most economically advantageous offer will be selected, and the construction work will begin immediately after the contract will be signed with the contractor.

“I am pleased to see Izmir’s dedication to achieving greater sustainability and improving the urban environment for the 4.4 million people who live in this great city. The EBRD congratulates Mayor Soyer on his green leadership and remains committed to our cooperation, which is improving people’s lives,” Arvid Tuerkner, EBRD Managing Director for Turkey, said at the signing ceremony.

In 2019, Izmir Metropolitan Municipality and EBRD signed a EUR 80 million senior loan to provide external financing for the Buca Metro line. In addition, for the metro project, the Municipality signed financial agreements with the French Development Agency (AFD) and the Asian Infrastructure Investment Bank (AIIB) totalling EUR 250 million with EUR 125 million each. The new metro line will be fully constructed with municipality’s own resources and credits.

The Üçyol – Buca metro line will connect with municipal bus, suburban rail and tram networks and help replace more polluting modes of transport, such as private cars and minibuses. It will further reduce traffic congestion and noise pollution and is expected to almost halve the area’s greenhouse gas emissions from current levels.