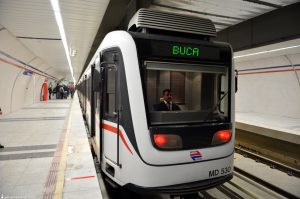 Izmir Metropolitan Municipality has initiated a tender for the extension of the metro system from Üçyol to Buca districts, as part of the third phase of metro project development.

The project will consist of civil works for extension of metro line by 13.5 km from Üçyol to Buca, construction of 11 underground stations, depot area and workshop building and 6 km connection tunnel between main line and depot area. The contract will include excavation works, concrete works, and electromechanical installations.

The proposed project, which has a total estimated cost of EUR 754.5 million.

rocurement process is split into three components, with two expected to be launched this year, while the other one, in 2021. The first one includes civil works the line, stations, depot and the tunnel connection, as well as electromechanical installations. This tender is planned to be launched during the first quarter of 2020.

The contracts will be financed through a loan from the European Bank for Reconstruction and Development. In December, the bank and İzmir Metropolitan Municipality signed an agreement for a EUR 80 million loan for the Üçyol-Buca metro project.