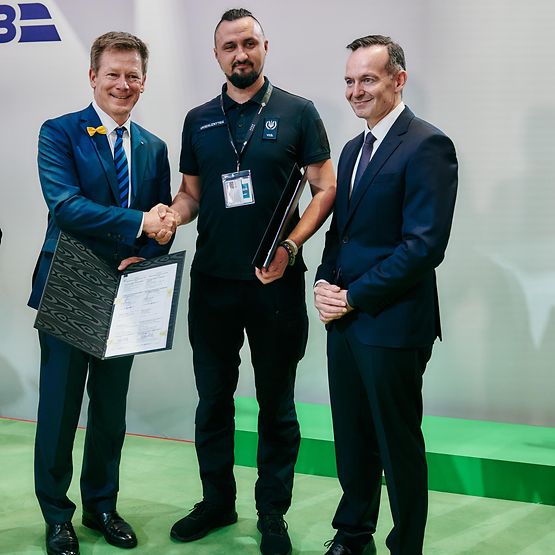 Richard Lutz, the CEO of Deutsche Bahn and Oleksandr Kamyshin, the CEO of Ukrzaliznytsia (UZ) signed a memorandum of understanding (MoU) to deepen their partnership and to cooperate in international freight transport. The agreement was signed at InnoTrans, in the presence of the German Federal Minister for Digital and Transport, Volker Wissing, and Adina Vălean, the European Commissioner for Transport.

The agreement will ensure that UZ receives assistance with rebuilding the Ukrainian rail system. It also covers collaboration to expand rail freight corridors and terminal capacity, as well as extensive consulting services for the introduction of European standards for rail operations and management.

“We have the utmost respect for how unwavering and courageous our Ukrainian colleagues have been in doing their jobs under wartime conditions. For millions of people, rail is the only means of transportation; for the economy, it is the most important lifeline. A functioning rail system will be essential as Ukraine rebuilds. DB and the entire European rail family are keenly aware of this fact, and we stand in firm support of our colleagues in Ukraine. It is both an honor and our duty to partner with UZ on its pathway to a bright future,” Richard Lutz said.

DB and UZ began working together to modernise and reform Ukraine’s rail system even before Russia began its war of aggression. The new partnership aims to improve rail freight transport in general and agricultural transport in particular. Experts from DB Cargo will help develop and upgrade freight corridors for transshipment between broad gauge and standard gauge.

It is already possible to access some major freight hubs in Ukraine’s western rail network with European standard-gauge freight cars, and this greatly lowers transport times. The option of using Ukrainian hopper cars is being considered as a way to increase grain exports to the European Union, since these cars can hold much higher volumes of grain than containers can. DB Cargo’s Polish and Romanian subsidiaries in particular are already using rail networks close to the border to transport large quantities of grain. This rail service offers a useful alternative to the sea route from Ukraine, since that route remains difficult to use.

DB will continue to assist UZ in establishing corporate structures, which, among other things, are a requirement if Ukraine is to receive financial assistance for rebuilding. DB also plans to provide UZ with spare parts, and it is assessing the option of providing freight cars, though they would need to be retrofitted to broad gauge, which would be a complex undertaking.