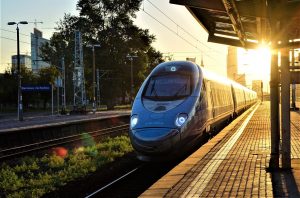 The CPK company (Solidarity Transport Hub – STH) has announced at the Łódź Fabryczna Railway Station the investor variant for the 140 km Warsaw – Łódź high-speed rail which will allow trains to run at speeds ranging from 250 km/h to 350 km/h.

The Warsaw – Łódź section is the first project under the STH Railway programme for which we have started the implementation of studies. With the announcement of the investor variant, we prove that railway investments in Poland can be carried out more efficiently and effectively by meeting the assumed schedules,” Marcin Horała, Government Plenipotentiary for the Solidarity Transport Hub Poland said.

The recommended route of the new Warsaw – Łódź line was selected from among four variants based on socio-economic, operational, technical, environmental and economic analyses. A cost-benefit analysis as well as a multi-criteria analysis were also carried out, which included, inter alia, technical and economic factors, and above all social and environmental factors.

The selected variant (W31) is the most favorable route of the new line guarantying the smallest collision with the development, the shortest travel times and the lowest construction costs. Cost-benefit analysis shows that it is also the most economically advantageous. The route will also save the travel time by 50% for both for existing rail passenger traffic and for those who shift from road to rail transport. The net present value (NPV) of time savings for passengers over the next 30 years is over PLN 19 billion (EUR 4.1 billion). It is expected that the number of passengers on the Warsaw – Łódź route will increase threefold by 2050, compared to 2019.

The study work paid particular attention to the proper integration of the new Warsaw-Łódź line into the existing rail network and as a result, the links with the existing lines will be created to enable regional connection between Łódź, Skierniewice and Łowicz. A new station will be built in Brzeziny on the eastern side of Łódź, which will enable the city to be integrated in the railway network. Therefore, the investment will bring benefits not only for long-distance traffic, but also for voivodeship connections.

In 2021, in the presence of Prime Minister Mateusz Morawiecki a contract for a technical, economic and environmental study for the Warsaw – Łódź high-speed rail was signed at the modernised Warsaw Zachodnia station. “This part of the project was completed in record time thanks to the full commitment and determination of the entire STH team. We are aware that the CPK railway investments will significantly increase the investment attractiveness of Warsaw, Łódź and many other cities and regions,” Mikołaj Wild, the CEO of Solidarity Transport Hub said.

The investor variant along with two alternative variants will be presented by the STH company in the application for the environmental decision to the Regional Directorate for Environmental Protection (RDOŚ). This is the stage before obtaining the location decision and building permit, and its subsequent implementation. The schedule assumes that the high-speed line between Warszawa Zachodnia and Łódź Fabryczna will be launched simultaneously with the Solidarity Airport which will be built 37 km west of Warsaw.

There are also plans to extend the Warsaw – Łódź railway that will connect Warsaw with Łódź, Poznań and Wrocław (the so-called Y line). STH says that in the coming months will unveil the proposed investor variant for the 200 km section between Łódź and Wrocław.

The CPK company is preparing the construction of 12 new railway routes, including 10 so-called ‘spokes’ sections, leading from various regions of Poland to Warsaw and the new airport. In total, there are 30 investment tasks and almost 2,000 km of new railway lines, which are to be completed by the end of 2034.

The so-called ‘spoke’ rail sections are already under preparation, which will complement the existing network and shorten travel times for passengers across Poland.