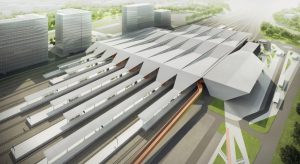 PKP Polish Railway Lines and Budimex have signed the contract for the reconstruction of Warszawa Zachodnia (Warsaw West) station. PLN 1.9 billion (EUR 425.9 million) is the value of the investment which has European financial support.

“The reconstruction of Warsaw West is a revolution on the transport map of Warsaw. Thousands of passengers use this station every day. After the reconstruction, more long-distance and suburban trains will use the station. This is another step for comfortable and predictable Polish railway transport,” Andrzej Adamczyk, the Minister of Infrastructure said.

Under the project, a new 30-km track system will be constructed to enable trains to travel from the perimeter line to the Radom line and to create direct connections including to the Chopin Airport. 130 switches and the overhead contact line will be completely rebuilt while an underground tram stop will be constructed.

All the platforms of the station will be roofed, escalators and lifts will be installed and adapted to the passengers with reduced mobility as well as for the passengers with bicycles. The project also includes the construction of additional platforms, of a footbridge connecting Wola and Ochota station’s areas, while the underground passage will be taller and wider and connected to the waiting room and ticket office space. The passage will also be extended to platform No. 8 at the perimeter line.

During the reconstruction project, the train traffic and passenger service will be maintained.

The project is expected to be completed in the second half of 2023. 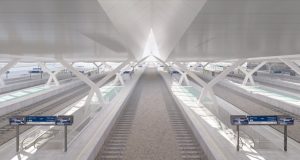 “Warsaw West station will be the most modern railway station in Poland. Everyday thousands of passengers on the agglomeration and long-distance railways will gain attractive travel and efficient connections with the public transport. West Warsaw will be adapted to the needs of all passengers. The new station capabilities will increase the role of railways within the Warsaw transport system, the Masovian Voivodeship and Poland,” Ireneusz Merchel, the CEO of PKP Polskie Linie Kolejowe, said.

The project will receive European financing through the Infrastructure and Environment Operational Programme 2014-2020. It is carried out under the ‘Works on the cross-city line in Warsaw on the section Warszawa Wschodnia – Warszawa Zachodnia’ project which applied for an 85% EU funding of eligible costs. The project is also implemented together with the construction of the Wilanów tram connection.

Warsaw West is the largest station in Poland in terms of the number of trains running. On average, around 1,000 suburban, regional, national, and international trains pass through the station daily. The reconstruction of Warsaw West is the next stage in the modernisation of the cross-city line.