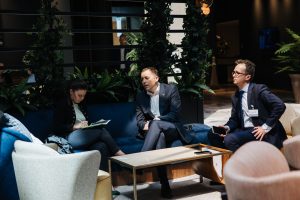 The railway component of the CPK Solidarity Transport Hub Poland (STH or Centralny Port Komunikacyjny) covers almost 2,000 km of lines and currently for 1,300 km of railway lines the preparatory work is already underway.

The company will announce in June an investor variant for a new high speed line of 140-km from capital Warsaw through the STH’s railway node in close vicinity and for the airport to Łodź, 3rd biggest city in Poland. It means that in the same quarter STH will apply for environmental decision (Environmental Impact Assessment (EIA) for this new line. In 2023 the decision is expected to be announced.

The whole rail project is in the advanced phase of planning. Feasibility studies for 1300 km out of 2000 km STH’s railway lines are almost ready. The first will be section between Warsaw and Łódź in the center of Poland and from Łódź to Wrocław in the southern west of the country.

The Solidarity Transport Hub is conducting the engineering contract tender concerning the services related to the construction of railway routes. EUR 550 million is the value of the contract and the winners will supervise individual stages of the investment, from design, through execution of works, to the guarantee and warranty stage. In this tender bids were submitted by 22 companies and consortia who have engineering services in various parts of the world in. The aim of the tender is to select contractors who will provide contract engineer services under a framework agreement.

CPK will soon announce a huge tender for a framework contract covering construction works on railways. The preliminary market consultations for this framework contract are applied into the country’s policy ecosystem because it will be the first time when Poland will adopt on such a large scale BIM technology for construction works. It is not the end. In recent months the Company has started another tender procedures, for instance for design of railway lines, valued at approx. EUR 1.5 billion.

Starting this year, the high-speed STH’s tunnel in Łódź entered a new phase as the documentation on the application for local decision has been completed. The 4 km tunnel is one of the most advanced projects of the STH which benefits environmental decision and the programme and spatial concept.

The project’s CAPEX for the first phase with implementation schedule from 2021 to 2027 covers EUR 3 billion for preparation works which will be financed by the Polish Government until 2023. The entire project will be carried out with funds from the government, from the EU (in rail part of the STH project) and from private sector (in aviation part of the investment).

For the project, an application of EUR 1 billion from EU CEF funds has been submitted for infrastructure construction and further studies. For the high-speed network including the multimodal hub and the “Y” line connecting Warsaw, Łódź, Poznań and Wrocław.

The CPK Solidarity Transport Hub will change the entire transport system in the region as well as the way Poland is connected to the European countries. Based on IATA forecasts, 40 million passengers and 1 million tonnes of freight are expected to use the new Solidarity Airport at the junction of railway lines of the first phase of the project.

The entire project covers the construction of 12 railway routes including 10 so-called spokes from various regions of the country to Warsaw and one new airport. In total, there are 30 investment tasks and nearly 1,800 km of new railway lines to be completed by the end of 2034.