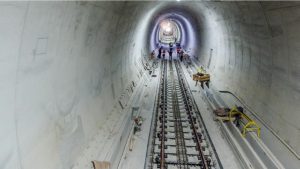 Rail.One has completed the delivery of 4,000 bi-block sleepers and other related system components for the first Rheda 2000 installation for Cortanovci tunnel in Serbia.

Rheda 2000 system is one of the world’s most widely applied ballastless track systems for both high-speed and high-performance railway lines and has been installed on over 4,500 km of railway lines in Europe, Middle East and Asia.

These bi-block sleepers for the tunnel were produced at the facility in Coswig, Germany, and then transported via truck to the construction site in Serbia.

The new tunnel, with a length of 2.3 km, is designed for train speeds up to 200 km/h. To comply with the client’s drainage concept, Rail.One has produced specially designed shortened Rheda 2000 bi-block sleepers, which perfectly and reliably address the special requirements on site.

The contract was awarded by RZD International that started the track works in early December 2020 and intends to complete them until mid of 2021. The Cortanovci rail tunnel, consisting of two parallel single-track tunnels, is one of the largest infrastructure projects in Serbia. At the same place, in Cortanovci, RZD International is constructing a double-track railway viaduct in the floodplain of the Danube River with a length of almost 3 km, on the Stara Pazova – Novi Sad line, part of Belgrade – Budapest main line.