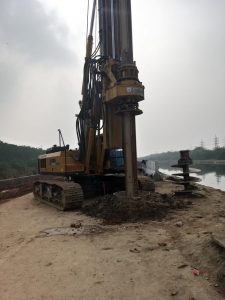 The project includes an 82-km line, of which 68 km elevated and 14 km underground linking Sarai Kale Khan in Delhi with Modipuram in Meerut. In Ghaziabad the system will have seven stations. The RRTS connection will be designed for speeds of 180 km/h, with an operational average of speed of up to 100 km/h. USD 4.25 billion was the estimated value of the project, of which USD 1 billion will be provided by the Asian Development Bank and USD 500 million will be covered by the New Development Bank.

In 2020, Larsen & Toubro was awarded two contracts to build 37 km and seven stations on the line. Last year the NCRTC also awarded Bombardier Transportation the train contract covering the delivery of 40 trainsets.

The Delhi – Ghaziabad – Meerut rail corridor is part of the first phase of the development of such systems across India. Recently, the Delhi-Panipat RRTS has been approved which will include a 103-km rail connection served by 17 stations.