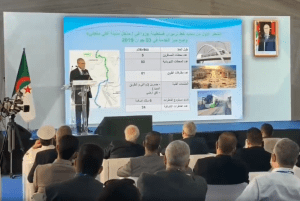 The Algerian Prime Minister Aimene Benabderrahmane and the Minister of Transport Aissa Bekkai inaugurated the second Constantine tram extension on September 29, 2021. The 3.6 km tram section provides the connection between Qadri Ibrahim station, at the entrance of the administrative district Ali Mingli, and Abdul Hamid Mahri University.

The ceremony, which was held in the administrative district Ali Mengli, Constantine, was also attended by the representatives of Alstom, Cosider, and Enterprise Metro d’Alger (EMA).

The line is 10.3 km long is providing transport connection from the station of Zouaghi to the University Constantine 2 Abdelhamid Mehri, located in the new city of Ali Mendjeli. The passengers travel 26 minutes along the entire line which significantly reduces the travel time between the two destinations. The extension strengthens the urban transport network by allowing access, for residents, from the old to the new city. 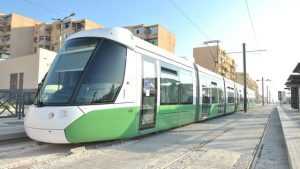 “As a result of the excellent teamwork and dedication of all members, we have successfully launched the extended Constantine tramway. We are committed to growing our long-term partnership with the Entreprise Metro d’Alger and addressing their mobility needs,” Amar Chouaki, the Managing Director of Alstom Algeria, said.

In 2015, Entreprise du Métro d’Alger awarded the consortium made up of Alstom as managing contractor and its partner, Cosider Travaux Publics a contract for the turnkey construction of the Constantine tram extension. As part of this project, Alstom built telecommunications, signalling, traction power, ticketing and rail systems, including the overhead lines.

The dynamic tests along the second tram extension phase started in January 2021 and in April, Alstom launched the final phase of dynamic and system integration tests for the new tram section.

In 2019, Entreprise du Métro d’Alger opened the first phase of the tram line 6.9 km extension from Zouaghi station to the new town of Ali Mendjeli.