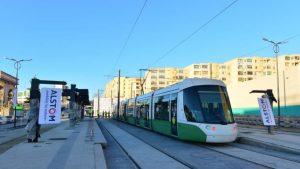 Alstom Algeria has launched the final phase of dynamic testing and system integration on the extension stretch of the Constantine tramway. Kamal Nasri, the Minister of Transport and Public Works, Ahmed Abdelhafid Saci, Wali of Constantine, and local authorities from the Constantine wilaya, visited the entire 10-km stretch of the new tramway line extension, from the Slimane Zouaghi stop to the Université Abdelhamid Mechri terminal.

The visit celebrates the achievement of nominal performances for the whole length of the second 3.6 km stretch served by 5 stations. Upon completing this step, the system will be ready for commercial service. The trams will connect the Kadri Brahim stop to the Université Constantine II Abdelhamid Mechri terminal. The stretch includes six passenger stops, equipped with six sales windows and two sales offices, in addition to three electric substations, two tramway hoppers, and the Ali Mendjeli viaduct.

The first phase of the extension, measuring 6.9 km, has been operational since May 2019, connecting the Zouaghi station to the edge of the new town of Ali Mendjeli. In January, dynamic testing was performed on the second phase of the Constantine tram extension, on the 1 km – long Université Abdelhamid Mehri – Ennasr section.

In July 2015, Entreprise du Métro d’Alger (EMA) had assigned the turnkey extension of the Constantine tramway line by 10.3 km in total to the consortium formed by Alstom (its leader) and Cosider Travaux Publics.

As part of this project and consortium leader, Alstom is responsible for telecommunications, signalling, traction energy, ticketing, and railway systems, including the catenary system.

The Constantine tram system entered commercial operation in 2013, when the vehicles run on an 8.9 km line between Ben-Abdelmalek-Ramdhan Stadium and Zouaghi. The system is daily used by 30,000 passengers.