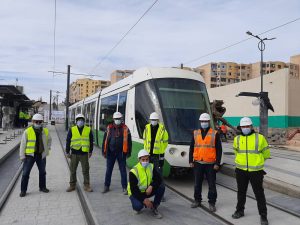 The first dynamic test on the phase two of the extension of the Constantine tramway line has been successfully carried out by Alstom, with its partner Cosider Travaux Publics.

During the test phase, Alstom’s tram ran for approximately 1 km from Université Abdelhamid Mehri station to Ennasr station, at a speed of 5 km/h. The dynamic test, which represents the last stage before entry into commercial service of the entire line, was conducted in the presence of the Wali delegate of the city of Ali Mendjeli, the Director of Transport of the Wilaya, the Senior Management of Entreprise du Métro d’Alger and representatives of Alstom Algeria, as well as representatives of Cosider Travaux Publics.

Entreprise du Métro d’Alger (EMA) awarded the turnkey project for the Constantine tramway line extension to the consortium consisting of Alstom as the leader and Cosider Travaux Publics in July 2015. Under the contract, Alstom was responsible for the delivery of the telecoms, signalling, traction energy, ticketing and track systems, including the catenary.

“The Constantine tram is a major project for Alstom Algeria. We are proud to lead the consortium, which is putting all its expertise to work to satisfy the ambition and objectives of our customer EMA. We remain fully mobilised and attentive to the needs of Constantine’s passengers, while offering them sustainable mobility solutions” Amar Chouaki, Managing Director of Alstom Algeria said.

The extension will have a total length of 10.3 km. The first phase of this extension, with  a length of 6.9 km, has already been in operation since 2019. It connects Zouaghi station to the entrance of the new city of Ali Mendjeli.

The second 3.4 km phase will serve Kadri Brahim station to the terminus of Abdelhamid Mehri Constantine 2 University. The 3.4 km-long extension will link the entrance of the new city of Ali Mendjeli to the terminal station of Université 2 de Constantine Abdelhamid Mehri. It consists of 6 passenger stations equipped with 8 ticket counters, as well as 3 electrical substations, 2 tram access routes and 1 viaduct.