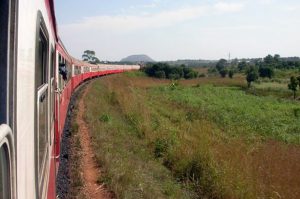 The European Investment Bank approved a EUR 123 million finance for the modernisation of Belabo-Ngaoundere line in Cameroon.

EUR 243 million is the total estimated cost of the project that involves the renewal of a section of 330 km of single-track non-electrified railway line between the Belabo in eastern Cameroon and Ngaoundéré in the Adamaoua region, at the border with Nigeria, on country’s western part. The railway line connects the Eastern region of Cameroon to Adamaoua.

The detailed studies of the project are ongoing and according to Inter-ministerial Committee on Railway Infrastructure, Comifer, the construction works are expected to start in 2021.

The feasibility study carried out by Typsa, a Spanish company, has been approved in March 2020. The studies have been supported by a XAF 360 million (EUR 548,814) financing covered the European Union in the framework of a technical cooperation facility. According to the local media, the renovation project has received funds totalling XAF 58 billion (EUR 88.42 million) of which the European Union provided XAF 15.5 billion (EUR 23.6 million). The remainder could come from the French Development Agency (AFD) with whom Cameroon is negotiating.

The tender of the detailed preliminary project and environmental and social impact study for the Bélabo – Ngaoundéré railway line renewal project has been published in the European public procurement journal, Tenders Electronic Daily (TED) in January 2020.

The project will be implemented on the existing alignment of the railway line and within the existing right of way, therefore potential negative environmental and social impacts are likely to be minor.

The line was opened in 1974 and it has never been modernised. This is Cameroon second largest rail project in the last two decades after the renewal of 175 km between Batschenga and Ka’a.

The modernisation of Belabo-Ngaoundere line will increase the quality, availability and reliability of rail services in Cameroon. It is expected to generate time and vehicle operating cost savings, reduce the maintenance costs of the infrastructure and improve railway safety. It should also contribute to the modal shift from road to rail, bringing climate, environmental and road safety benefits.