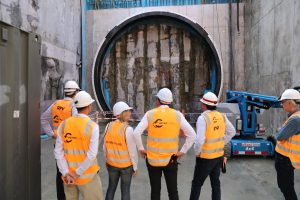 Melbourne Metro reached a historic milestone as the first section of the is now complete, with the first tunnel boring machine, breaking through to complete the journey from Arden station to the tunnel’s western entrance in Kensington.

Since her launch in August 2019, the TBM has travelled 1.2 km and installed 4,200 curved concrete segments to create 700 rings lining the walls of the tunnel.

The second TBM is travelling on a parallel route to carve out the second tunnel from Arden to Kensington and will break through in the coming weeks.

Work began in January at the site of the new Anzac Station on St Kilda Road site to assemble the third and fourth TBMs for the Metro Tunnel project. These are expected to be launched in mid-2020.

Melbourne metro project envisages the construction of 9 km twin tunnels and five new underground stations from North Melbourne through to the Domain precinct, south of the CBD.