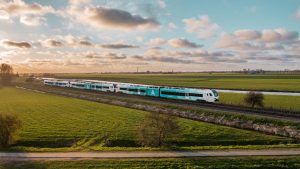 Arriva Netherlands will start battery train trials in the east of the Netherlands showing Stadler’s commitment to the environment and help its mission to decarbonise the rail transport.

The tests will show the effectiveness of battery-powered trains for use on non-electrified lines and will be conducted on a modified Wink train, using recuperated braking energy to power the train.

The low-floor single-level train is fitted with fully accessible drive unit located between the two cars, offering extremely flexible drive solution. The train is designed with various traction solutions and can operate as a diesel multiple unit, a DMU with HVO (hydrotreated vegetable oil), a BMU as diesel with batteries, electric with a battery solution or even fuel cells. The Wink has a capacity for up to 275 passengers, with seats for around 150. Depending on the model, it can reach maximum speeds of up to 160 km/h.

In 2021, Arriva Netherlands put into service 18 new Wink electro-diesel multiple units on the rail network of Friesland and Groningen provinces. The new trains are part of a EUR 170 million contract signed in 2017, which included an option for 6 additional trainsets.

Stadler is committed to reduce emissions in rail transport developing and providing green technology, to support rail services on long distances non-electrified lines, which can be operated by battery trains.

Stadler has sold around 300 trains and locomotives with traction batteries in ten countries, including more than 110 Flirt Akku trains for three regions in Germany. It has a proven track record in the area, deploying battery technology in trains, trams, tram-trains, metros and locomotives.

For diesel multiple units, the battery technology that Stadler deploys involves capturing energy while a train is braking in order to cut carbon emissions. For locomotives, batteries are used to enable them to travel emission- free for the last mile of their journey and while they are being shunted. On trams, tram-trains and metro trains, the use of batteries means that they can travel short distances on non-electrified lines. Batteries allow electric multiple units to cover long distances on non-electrified lines.

In 2021, battery train trials were undertaken in Germany on a prototype of a Flirt Akku BEMU showing that the trainset can cover 224 km in battery-only mode which secured Stadler a mention in the book of Guinness World Records.

These tests were the culmination of a three-year research project into developing and testing battery technologies for rolling stock. The project provided Stadler with valuable insights and helped further its long-term aspiration to develop carbon emission-free rolling stock around the world. In 2019, Stadler signed a contract with Schleswig-Holstein for 55 battery-powered Flirt Akku multiple-units and in 2021, it won an order for 44 Flirt two-car units for Pfalznetz, a rail network in south west Germany. Recently, DB Regio ordered 14 additional Flirt Akku, replacing the old diesel-powered trains in northern Germany.

In addition, two years ago Stadler won its first ever bid for a hydrogen-powered train, the first of its type ever to be ordered in the US. The contract was awarded by San Bernardino County Transportation Authority and includes an option for four additional trains.