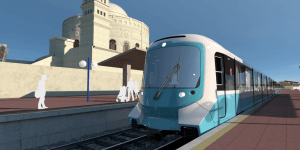 The National Authority for Tunnels (NAT) awarded Alstom a EUR 876 million contract for the supply of 55 nine-car Metropolis trains including an 8-year maintenance contract. The new trains will operate the upgraded Cairo Metro Line 1. The contract is funded by the French Government.

“We are honoured to play a role in the development and modernisation of Egypt’s urban network and are grateful for the National Authority for Tunnels confidence in Alstom’s Metropolis solution,” Henri Poupart-Lafarge, the Chief Executive Officer of Alstom said.

The train’s interior layout is tailored to the specific requirements of the line and designed to maximise train capacity while enhancing comfort, accessibility and passenger flow. It features wide corridors and a dedicated women’s area.

At peak times, each train will be able to carry 2,580 passengers and its eco-design brings increased energy-efficiency and is up to 98% recyclable. Alstom’s proposal includes a unique design to reflect the history and culture of Cairo.

The new trains will benefit incorporated digital solutions which will allow real-time passenger information, dynamic route maps, video displays and video surveillance. Alstom will also install its HealthHub, a condition-based and predictive maintenance solution. Through enhanced data collection, the system optimises the lifecycle costs and saves up to 20% in preventive maintenance labour and 15% in materials consumption.

Maintenance work will be carried out at the depot in Cairo and managed locally, creating long-term local job opportunities. A training and development plan will be rolled out in partnership with the Egyptian Company for Metros (ECM), the operator and maintainer of Line 1.

The contract follows an agreement signed in June by Bruno Le Maire, the French Minister of the Economy, Finance and the Recovery, and Kamel El-Wazir, the Egyptian Minister of Transport, concerning the financing of this agreement and of the maintenance contract, for the development of the Cairo metro.

Cairo Metro Line 1, the oldest metro line in Egypt, was inaugurated in 1984. The 42.5 km long with 33 station is carrying 2.5 million passengers per day between El Marg and Helwan. The modernisation project received EUR 205 million funding from the EBRD, EUR 350 million provided by the EIB and a EUR 50 million loan from Agence Française de Développement. The city will also modernise the 23-km Line 2 which needs a EUR 240 million investment and is supported by the EIB.

In Cairo, Alstom is also implementing a contract to develop city’s public transport. As part of a consortium with Orascom Construction and Arab Contractors, a EUR 4.1 billion contract signed in 2019 for the construction of two monorail lines. Under the contract, Alstom will deliver Innovia Monorail 300 technology. The first two 4-car monorail trains were delivered in September.