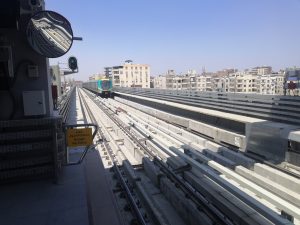 The European Investment Bank and the Egyptian government signed a EUR 1.13 billion agreement for the rehabilitation and expansion of metro and tram systems in Alexandria and Cairo. The EIB financing contract will be signed in two tranches. The first tranche of EUR 600 million has been signed on December 29, and the second tranche of EUR 528 million will be signed this year.

The EIB financing will support three large-scale urban rail transport projects. The first investment will support the rehabilitation and extension of the existing 13.8 km-long El-Raml tram line in Alexandria. EUR 138 million is the total value of this project for which the tender documents are being finalised.

The second funding will support the rehabilitation and upgrade of an underused 22 km-long urban railway line in Alexandria into a into a high frequency metro system (the Abu Qir Metro), adding metro stops and improving road safety by removing at-grade crossings. The project of converting the Abu Qir/Alexandria railway line to a metro line with a value of EUR 750 million. The project is already in the tendering process.

The third project will support the rehabilitation of the 23 km-long metro Line 2 in Cairo that has been in operation for 23 years and requires urgent upgrades of its electrical and mechanical systems. This project needs a EUR 240 million financing. Cairo metro Line 2 rehabilitation project is in line with the framework of the comprehensive plan implemented by the Ministry of Transport to modernise the infrastructure of the first and second metro lines, by modernising the signalling system, communication systems and central control systems, renewing rails and electromechanical works, and purchasing new air-conditioned trains to make all the trains of the current fleet air-conditioned.

The projects to be implemented in Alexandria and Cairo “have great importance in strengthening the mass transit system, which the political leadership has directed to be comprehensively developed in order to provide distinctive services to citizens,” Kamel Al-Wazir, the Egyptian Minister of Transport, said.

The structure of the EIB facility allows the Egyptian government to secure the funding necessary for large-scale urban transport projects on competitive financial conditions provided under the European Union External Lending Mandate (2014-2020).