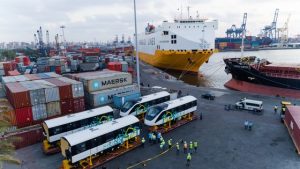 The first two of 70 four-car Innovia 300 monorail trains for the Cairo Monorail project have arrived at in Cairo after being completed at Alstom’s Derby UK factory. We remind that the UK Export Finance agreed to provide a credit facility of GBP 1.7 billion (EUR 1.97 billion) to the consortium of Alstom, Orascom and Arab Contractors responsible for the monorail project.

The propulsion systems application was developed at Alstom’s site in Trapaga, Spain.

The dispatch of the first 8 fully automated, driverless cars out of 70 trains comprising a total railcar fleet of 280 cars is a major milestone in the Cairo Monorail project.

In August 2019, an Alstom-led consortium composed of Orascom Construction and Arab Contractors signed a EUR 2.7 billion contract to design, implement, operate, and maintain the two lines. The project includes a 54 km line connecting the New Administrative City with East Cairo and a second 42 km line connecting 6th of October City with Giza.

After the construction phase is completed, the Alstom-led consortium will provide 30 years of operation and maintenance (O&M) services for both lines.

The two monorail lines will transport 45,000 passengers per hour in each direction.

Egypt is committed to developing and improving mobility services for its citizens, while reducing traffic congestion and environmental impact.