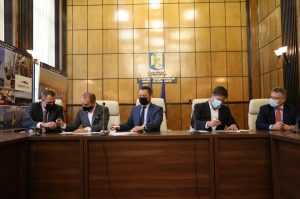 Metrorex, the public transport operator of Bucharest metro system, has signed a cooperation agreement with four authorities for the southern extension of Line 2 Pipera – Berceni towards the road belt line.

The agreement was signed on 1st November by Ștefan Paraschiv, the Director General of Metrorex, Ionel Scrioșteanu, the State Secretary of the Ministry of Transport, Hubert Thuma, the President of Ilfov County Council, Daniel Băluță, the Mayor of District 4 of Bucharest Municipality, and Ioan Pintea, the Director General of CFR Infrastructura, the Romanian rail infrastructure manager.

The officials have discussed about the public transport improvement and the development of the mobility in the South-East Bucharest by expanding the metro Line 2 with a new station – Tudor Arghezi. It should be mentioned that the Tudor Arghezi metro station, which is at an advanced stage in terms of structure and track laying, was built following an agreement between Metrorex, the Transport Ministry and the District 4 authority for the introduction of commercial operation of the technological line connecting Line 2 with the Bucharest rail network.

Following the agreement, the authorities have committed to support the costs of the project.  the pre-feasibility and feasibility studies will be jointly financed by the Ilfov County Council and the District 4 authority on a 50:50 basis.

The parties will also sign an additional agreement to support the costs of expropriations, the costs of technical design documentation and the costs of carrying out the works.

The current agreement will be submitted in the eligible beneficiary category for the financing of the investment from both the European non-reimbursable funds and other identified sources of financing.

The total value of the investment will result following the documentation related to the feasibility study and the technical project.

After the project implementation, the infrastructure and other related assets will enter public property and will be leased to Metrorex, which is under the Transport Ministry management.

“We all have signed this cooperation agreement to implement project on the extension of the Line 2 Pipera – Berceni to provide transport connection between the capital and its metropolitan area. This the only the beginning of the transport development in Bucharest-Ilfov area to offer the citizens a connected and improved public transport system,” Ionel Scrioșteanu said at the signing ceremony. Recently, Metrorex has signed the design contract for the construction of a 4.5 km extension of Line 5.

The existing Line 2 offers the connection between Bucharest’s South-Eastern, central and Northern areas providing transport services for 6 million passenger per month (in the period before the Covid pandemic – 19). This traffic represents 40% of the total passenger volume using the metro system of the Romanian capital.

The metro Line 2 is a 19.9 km-long double track served by 15 stations, including the new Tudor Arghezi station currently under construction, and one depot. The line is operated by 25 CAF metro trains which run at a frequency of 3 minutes being adapted to peak traffic.