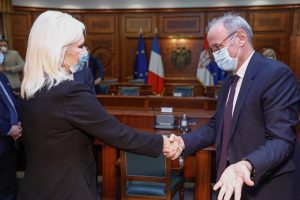 The Serbian Minister of Transport, Zorana Mihajlovic, and Filip Delur, the vice president of Alstom Group have discussed on the construction of Belgrade metro project. The Ambassador of France to Serbia, Jean-Louis Falconi has atteded the meeting.

According to the minister, the French company is interested in participating in the construction of Belgrade metro, that is in the system equipping phase. “The Ministry will provide all the necessary support to jointly realise such an important project for us, which is backed by two presidents Aleksandar Vucic and Emanuel Macron.”

“I believe that you had a good meeting with the Minister of Finance and that financial arrangements will be agreed on soon, both for construction works and for works on the system,” Zorana Mihajlovic said.

In May 2020, a Donation Agreement was signed between the Government of France and the Government of Serbia with a total value of EUR 8.3 million. The two governments agreed on the procedure for the realisation of a donation of EUR 400,000 for the feasibility study.

“Along with the feasibility study, preparatory works for technical solutions are underway and Alstom will actively work in the coming months so as not to waste time for the implementation of the Belgrade metro project. We are aware of the importance of this project for the Serbian government,” Deler said. 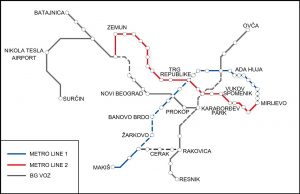 Recently, the deputy mayor of Belgrade Goran Vesic has announced that the construction of Belgrade’s first metro line will start in December 2021. EUR 4 billion is the total value of the project, of which EUR 1.8 billion for the first line and EUR 2.2 billion for the second one.

According to the deputy mayor of Belgrade Goran Vesic, Alstom will work on the electromechanics, rolling stock, the power supply system, while the construction works will be performed by China’s Power Construction Corporation. The ratio will be 30% for the French side and 70% for the Chinese part.

The two lines will have a total length of 41.8 km with the first line expected to have a length of 22 km and the second one, 19.8 km. The first line will run along the Sava river, crossing the Belgrade centre, linking the Makisko Polje area in south part of the city, to the Mirijevo urban neighbourhood in the northeast. The second line will connect Zemun railway station crossing the New Belgrade urban municipality, with an interchange with the first line in Mirijevo.

In July, an agreement was signed with Egis for the feasibility study for the first two metro lines which is expected to be submitted to the Ministry by the end of 2021.

The new transport system will promote the sustainable mobility and will reduce road congestion. In the last year, the road traffic increased with 4,000 additional cars per month, thus the metro transport will encourage the increase of public transport market share.