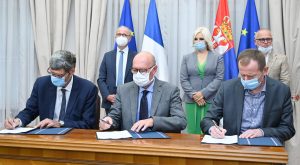 The Deputy Mayor of Belgrade, Goran Vesic, and the representatives of Egis Group have signed the contract for Belgrade metro feasibility study which is expected to be completed by the end of 2021 when the construction works are expected to start. Egis will be responsible for the feasibility study, conceptual design and environmental impact assessment.

“At the end of next year, the construction of Belgrade metro will begin, thanks to joint cooperation with the Government of Serbia. We are talking about a project of national importance, the realization of which would not be possible without the support of the President and the Government,” said Goran Vesic, the Deputy Mayor of Belgrade.

The Serbian capital would have a 60-km metro system served by 60 stations which is estimated at EUR 6 billion.

“We are witnessing the signing of a commercial contract for a feasibility study for the construction of Belgrade metro, worth 6 billion euros,” the Minister of Transport, Zorana Mihajlovic said.

The project is supported by a donation of EUR 8.3 million from the French government. In August 2019, during an official visit of French President Emmanuel Macron, the Serbian Minister of Transport, Zorana Mihajlovic signed an agreement for the implementation of the project.

“For France, this is one of the largest and most important projects that we will implement after President Macron’s visit to Serbia. “Together, French and Serbian experts will form a team that will realize this investment, with the huge support of the Government of Serbia and the city of Belgrade,” said the Ambassador of France to Serbia, Jean-Louis Falconi, at the signing ceremony.

According to a pre-feasibility study of Egis, the Belgrade metro system would have two lines with a total length of 42 km, estimated at EUR 4 billion. The first line, which will be 22 km-long with 24 stations would need a EUR 1.8 billion investment. The construction of the second line with a length of 20 km and 21 stations is estimated at EUR 2.2 billion. It will provide transport link between the Zemun area, where a passenger train station is refurbished, and Mirijevo, an urban neighborhood of the Serbian capital.

Serbia intend to borrow EUR 580 million with EUR 80 million coming from France, while EUR 500 million are expected to be covered from IFIs financing.