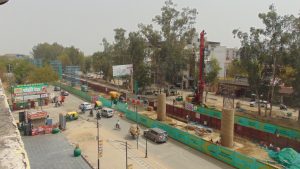 The European Investment Bank is assessing the Agra metro project and if it will be in accordance with its policies, a EUR 480 million loan will be provided.

EUR 1 billion is the total value of the project covering the construction of two interconnected lines with a total length of 30 km served by 27 stations in the city of Agra, in the state of Uttar Pradesh in Northern India.

The project also includes the acquisition of the related rolling stock to operate the new lines. According to a document of Uttar Pradesh Metro Rail Corporation, which is responsible for the implementation of the project, to meet the transport demand, the system will need 84 metro coaches.

The Agra metro project covers two mass transit lines which will cross through the city centre and will connect important tourism areas including the Taj Mahal, the historical Agra Fort, and in addition will provide transport connection to the health facilities, the main railway station.
The first corridor will be constructed between Taj East Gate and Sikandra, a famous residential area known for the tombs of Mughal Emperor Akbar. It will have a length of 14.25 km of which 6.3 km will be elevated and 7.7 km will be underground section. 13 stations will provide access the mass transit services, of which 6 elevated and 7 underground stations.

In December 2020, the Prime Minister of India, Narendra Modi, has launched the construction works for this first metro line of the city.

The second rail corridor will link Agra Cantonment rail station, which will provide transport connection to the first line, and Kalindi Vihar district. The elevated line will have 15.4 km served by 14 stations.

In 2020 the Uttar Pradesh Metro Rail Corporation sent to Bombardier Transportation, now part of Alstom, a Letter of Award to deliver 67 Movia three-car trains (201 cars) for Agra and Kanpur metro projects. For Kanpur metro system, the EIB has approved a EUR 650 million loan.