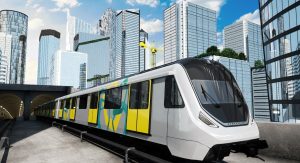 Uttar Pradesh Metro Rail Corporation (UPMRC) sent Bombardier Transportation a Letter of Award for the supply of 67 Movia three-car trainsets and a rail control solution for the Agra-Kanpur metro projects.

The agreement has a value of EUR 245 million and includes an option for 51 additional metro cars.

The rail control system as well as the new trainsets will be locally designed and manufactured at Bombardier’s Savli and Maneja sites near Vadodara in India. The rolling stock will be designed at the Global Engineering and Technology Centre in Hyderabad, India. The contract is part of “Make in India” strategy.

“Manufacturing and supply of 67 high-end state-of-the art modern trainsets of three-cars each, manufactured in Savli, India by Bombardier, shall be a feather in “Make in India” dream of India,” said Kumar Keshav, the Managing Director of Uttar Pradesh Metro Rail Corporation.

This is the second major contract for Bombardier in India this year. In May 2020, Bombardier was awarded the contract for the delivery of 10 three-car trains for the Delhi-Ghaziabad-Meerut semi-high-speed rail corridor.

The Kanpur metro will also have two lines. The IIT Kanpur – Naubasta is the first line which will have 23.8 km and and the second line will be 8.6-km-long connecting the Chandra Shekhar Azad University and Jaurali.

The two metro corridors will be connected to the existing public transport systems and to the major public areas, such as the tourist destination of Taj Mahal and city cluster areas. The projects will allow the creation of a sustainable mobility, with improved connectivity and an enhanced passenger experience. In the two cities 6 million of citizens are living, of which 4 million people in Kanpur and 2 million people in Agra.