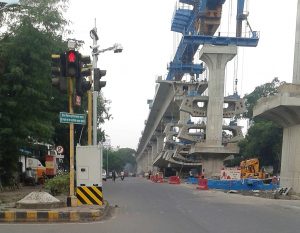 The European Investment Bank will provide a EUR 650 million loan for Kanpur metro project following the assessment announced at the beginning of this year.

The financing will support the construction of two new metro lines with a total length of 32.4 km served by 18 elevated and 12 underground stations as well as the rolling stock procurement.

The first metro line will be 23.8 km-long linking the Indian Institute of Technology Kanpur (IIT Kanpur), in north-western part of the city and Naubasta district, in south-west. Recently, Uttar Pradesh Metro Rail Corporation Limited (UPMRC) has launched a tender for the design and construction of a 8.6 km metro tunnel and four stations as part of the first metro line. In 2019, AFCONS Infra has won a tender for the construction of 9 stations and a viaduct from IIT Kanpur to Lala Lajpat Rai Hospital station.

The second metro line will provide transport connection between Chandra Shekhar Azad University in north and Jarauli in west.

The Kanpur metro project has been approved in February 2109 by the Union Cabinet of India with a total estimated investment of USD 1.5 billion. Under the 2020-2021 budget, the city has received from Uttar Pradesh government a EUR 46.6 million for the first phase of the project which has started at the end of 2019.

The line is expected to be completed within five years.

In 2024, the first phase of the metro system is expected to have a capacity of 18,040 passengers per hour per direction.

In July, UPMRC awarded Bombardier Transportation a EUR 245 million contract for the supply of 67 Movia three-car trains for Agra and Kanpur metro projects.

This is EIB second biggest operation outside the EU to date and the second metro project supported by the bank in Uttar Pradesh, following a EUR 450 million investment in the development of a metro rail system in the city of Lucknow.